During the long, bitter general election campaign, which effectively began in 2010 and during which Nigel Farage’s tenacity was the principal – likely the ONLY – reason Cameron was forced into offering a referendum, the gloves came off. Both Labour and Conservatives haemorrhaged support to Ukip because, well because neither left nor right offered anything to working people, patriots or anybody who didn’t bow before the unholy alliance of political correctness and wholesale appeasement of every ‘progressive’ idiocy emanating from the snowflake generation and its creators.

So shaken by his appeal to their former grass roots supporters were they that the established parties made common cause to brand Farage as a racist extremist. In order to do this they often had to tie themselves in knots and trawled the worst of their own ex-supporters – whose votes they had previously been grateful to claim - to dredge up every out-of-context, deeply stupid and rash comment or action and paint them as if they had emanated from Farage himself. Desperate to nullify his appeal, they succeeded in creating a fictional toxicity that nevertheless put off many who actually agree with everything he stands for from placing their ‘X’ in the Ukip box on the ballot.

Enter Vote Leave, the official out campaign who should be lining up to hoist Nigel aloft and place him nose to nose with Dodgy Dave. But no, wait... bollocks. Having spent so much time, energy and credibility on creating a monster they find themselves far aloft on the blast of hot air from their very own electoral petard. And while I dearly hope they can find the grace to co-exist, I fear otherwise and a part of me secretly rubs its metaphorical hands at the discomfort of Gove and Johnson trying now to appear much wiser than they were. Still, they’ve done it now.

But the drive must go on and the relentless round of baby-kissing, hand-pumping and being all things to all people has another forty-odd days to run. Some Brexit activists have hitched themselves to the various waggons and haven’t seen home in weeks. It’s a lonely life, out on campaign trail and it is little wonder that after days filled with bustle and bluster, some find solace and succour wherever they can. And so it was that one flag-waver for Blighty found himself in Plymouth one wet Wednesday evening. 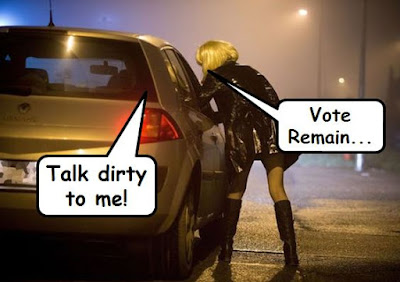