Are YOU the Baddies?

A frequent demand we hear from Remainers, confused and afraid of a future without anybody to tell them with what they may wipe their arses, is to name one tangible benefit of leaving the EU. Just one they cry; and then, when a dozen perfectly respectable reasons are presented, they dismiss them as unicorns. ‘You don’t know’, they insist, to which we all chorus, ‘neither do you’. But there is one very real benefit which we receive every day, even before we have extended so much of a toe into the greater world beyond.

It is a benefit which brings me joy unconfined. Forget the execrable dirge, Ode to Joy and give me, every time, the true Brexit anthem – the massed weeping, wailing, gnashing of teeth and garment-rending of those with such poverty of ambition they wish to cling onto Mutti Europe’s apron strings forever. Oh, how flat the Libdems jolly ‘Bollocks to Brexit’ tee-shirt jape fell as they just looked like kids on a massive sulk. And even better, Molly Scott Cato – Green MEP – announced on Twitter that they had actually stopped Brexit. Ah the innocence of the fresh-scrubbed mind.

But oh, the wrath of the media and the self-righteous cheerleaders for supranational governance. No masked thugs of Antifa, no hysterical TellMama lies about non-existent offences, no milkshakes, no braying idiots with megaphones, no face paint, no 30-year old idiot children in shorts and overly-tight tees, no idiot in a cape; just a quiet, dignified refusal to honour the undemocratic de-facto country called the EU. That was all. The Brexit Party had intended to sit for the odious anthem, but when it was insisted they stand they simply turned their backs.

No bricks were thrown, no fists were raised and not a single reputation was impuned. They didn’t even say Bollocks to No-Brexit, or Fuck-EU; they just quietly turned away from the tune which Hitler, on more than one occasion, chose for his birthday celebrations. Remember Kubrick’s Clockwork Orange – the ninth was used for that very reason. You’d have thought that the association of Beethoven with some of the world’s more extreme ideologies would have been food for thought when selecting an anthem for a supposed peace project.

Anyway, the FBPE hashtags were in a froth right out of the gate. Then they decided to double down with the incessant Nazi Party comparisons; ‘you know who else turned their back?’ etc... Oh, the irony of the fan-boys of the Hitler inspired German dominance of Europe fabricating equivalences were there were none. Even the recently self-nonentitied Gavin Esler tweeted out that very foolish and very easily demolished post hoc ergo propter hoc fallacy. 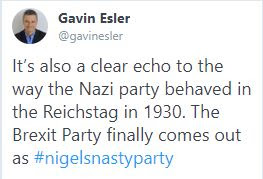 Esler: the search for relevance continues...

Unlike Nazism and Communism and Socialism and Corbynism and islamism and all the other isms inspired by political thinking and deep-rooted desires to re-shape the world, ‘Brexitism’ is not a cabal of power-crazy conspirators whipping up the crowd. There is no ideological kernel, no plot by supposed rich backers or rogue states to destabilise western society and rake in profits. With the Brexit Party what you see is what you get. Ordinary people, dismayed at how their voice is ignored, fighting back; fighting for survival; fighting to be heard.

If you want to dress that up as the resurrection of Hitler himself that speaks volumes about your poverty of empathy, your inability to accept simple things at face value, your refusal to face facts, your loathing for individualism and most of all, your impotent rage at losing a vote. Because, for all your pretending you are the only ones who see the light, you are the ones who are being played. Like a cheap violin. You want to see Nazis? Look in the mirror.
Posted by Batsby at 04:20