Bow before your masters

Forget Sars-Cov-2; we’re going to win that battle and it won’t take all that long in the overall scheme of things. And while I can’t say it openly on Twitter, for fear of upsetting followers who are determined to see the illuminati around every corner and the Rothschilds behind every deal, it strikes me that with all the hysteria over it we are taking our eyes off the most important existential threat we actually do face.

Our woke media and their callow disciples think there is nothing to worry about the threat that islam presents to an already weakened west. They say it’s islamophobia, that it’s just a bunch of old racists getting rancid over brown people. But it’s not; islam has an avowed intent to dominate the world and to have every human being submit to their very unlovely beliefs. If Christianity is a crock – and it is – it at least preaches peace and love and has inspired some of mankind’s greatest achievements.

What does the new islamic regime offer the followers of the mad mullah mohammed? Penury, it seems, in return for the false promise of an afterlife which mostly appears to offer endless gang-bangs for males; if any muslim women get to go to their heaven it appears they will be recycled as virgins and made available to the rape gangs which seems to be an obsession for muslim men. That or sultanas, depending on which depraved translation of the koran, you decide to follow. It somehow doesn’t seem very progressive.

So this story from Germany is unwelcome news indeed. In denying the appeal to sanity from locals who have been and will continue to be aurally raped by the wailing, the authorities have decided that the hideous call to jihad ‘prayer’ will resume. “Every society must accept that one will sometimes be aware that others exercise their faith,” The judge said, asserting once again the supremacy of ‘the new Germans’ over those who actually built all that the interlopers benefit from.

Across Europe mosques have been erected where no sane local authority would grant permission for any other form of building, let alone the eyesores which are the recruiting grounds for yet more unstable malcontents. Whereas some middle eastern temples are magnificent – at least in appearance (their construction quality having much in common with their culture) – those erected in civilised countries are huge armoured monoliths where the indigenous governments have forfeited their right to police.

To counter the criticism we are repeatedly informed that their numbers are small, their intentions lawful and that they contribute to the economies of developed lands, presumably by providing endless new work for benefits clerks. Small numbers? Try telling that to the cowed non-muslim inhabitants of the many islamic shitholes littered around the British Isles. That they appear to get preferential treatment, ahead of the indigenous, speaks volumes about the fear of governments in the face of a faith which brooks no dissent. 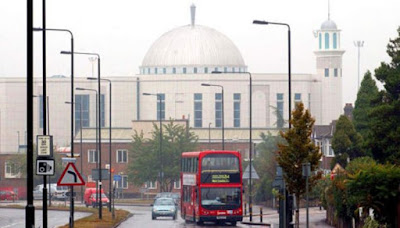 Place of worship, or fortress for the coming war?

So, once again, a warning that will fall on deaf ears. If you want your daughters to avoid the hideous prospect of being raped and trafficked then convert them now, before they hit puberty. If you don’t want your sons to suffer assault and battery then tell them to grow their beards, get on their knees and don’t dare to be gay. And as for your wives, beat them gently, cover them up and make them use the other door. Alternatively, grow a set and start fighting back.

Email ThisBlogThis!Share to TwitterShare to FacebookShare to Pinterest
Labels: mosque or fortress?