I didn’t watch the leaders’ ‘debate’ last night because I’ve already seen far more than I want to see of spin-doctored, spruced-up talking heads spouting garbage written by party apparatchiks and tutored by image consultants in how to avoid the pitfalls of the hit-and-miss pseudoscience of body language. A dismal platoon of ‘experts’ will be on parade during the day to earn their fees by regurgitating sixth form psychology about gestures, smiles, turns to camera and handshakes. None of it is at all relevant to the everyday politics that actually affects us.

I want to hear far more from candidates such as Lee Anderson, a former Labour councillor now standing for the Conservatives in Ashfield. I want to hear how Momentum so repulsed this former miner that he switched from tribal Labour to the hated Tories. I also want to hear more about his outspoken views on dealing with nuisance tenants. And I want to know how his views go down, not among the cognoscenti in Parliament, but among the beleaguered people who have to live alongside those tenants.

Because these issues, real issues that intrude on people’s actual lives, are repeatedly ducked by governments. Or, if solutions are proposed, they are attacked by the soft-bellied opposition parties banging on about human-bloody-rights. Already, Mr Anderson’s remarks have been condemned as ‘targeting the vulnerable’, entrenching division and showing a lack of empathy towards those he seeks to represent. Really? Has anybody asked them? I would suggest that were the voices of those he wants to represent ever heard they would be raised in a cheer for common sense.

There are some very real, very pressing issues driving a wedge through what I hesitate to call our society. We have violent crime, rampant disorder, a disrespect for the law and an arrogance in some that borders on insurrection. We have become uncivil, suspicious, cynical and angry at the toothless measures deployed. Ordinary working people, the vast majority of the population, don’t want to ‘reach out’ or understand, or show empathy for those who refuse to fit in. We want correction and punishment, swift and effective justice.

Instead we are lectured by amateur sociologists and social philosophers about what a wonderful, vibrant country we live in and if only we could all just embrace diversity and rejoice in difference, we would somehow evolve into the egalitarian society the chattering classes imagine we all want. Well, we all don’t. Unlike the indoctrinated drones of the parliamentary echo chamber we don’t hear reassuring voices about how throwing money at ‘studies’ will somehow reveal solutions. We simply experience the misery those 'solutions' inevitably create, 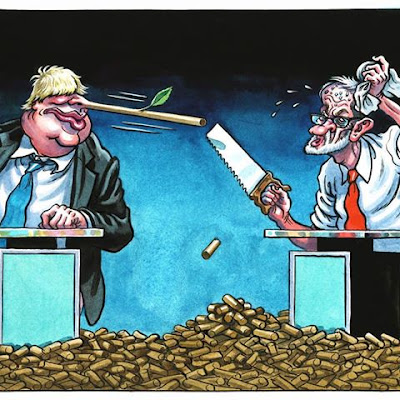 He lies? Don't they all?

The people already know the remedies, but the politician don’t have the guts for them. The people know that equality is a crock, but it is a holy grail to western leaders, hungry for the adoration of their own kind. The people want leadership, not a cosy consensus for yet more pandering to difference. The people know that diversity is often a weakness, not a strength as touted by those with the most to gain from the non-jobs it produces. The people want some honest, down-and-dirty, get-it-done politics. Not pretend fucking debates which just make us hate politicians even more.