Voltaire didn't actually say that he would defend to the death your right to say something with which he disagreed, but he is usually quoted as saying so and it is widely agreed that's what he meant. It's often the last thing somebody tweets before then trying to rouse a nice, caring hate mob to get a user's account closed down.

Whether or not such action is successful seems to depend very much on from where the disagreeable words originate and at whom they are aimed. It's exactly as if some people's hate is more acceptable than other people's hate. So, it is okay, apparently, for people to loudly demand for two decades the death of an individual, yet it is wrong to observe that almost every suicide bomber hails from one closed community holding a single irrational and unprovable belief.

It appears to be hateful and loathsome and vile to drunkenly utter on social media a racist taunt which you then withdraw, but it is fine to loudly and widely revel in the death of an octogenarian and hurl abuse of the most extreme kind at any who defend her legacy. And now it turns out that being from Liverpool places you in a special class affording you protection from nasty words, presumably because you can't handle them when they're coming your way.

Thus it was that Twitter stalwart @Old_Holborn was reported to Essex Police yesterday for repeatedly tweeting and blogging harsh words about Scousers, yet no such action seems to have been taken against any of the many that took it upon themselves to call for a mob to descend on his home and take the abuse from the merely verbal to the physical level. Predictably, Twitter has 'gone off on one' today. (Search the hashtag #SaveOldHolborn if you really need to know.)

Is it naivety, gullibility or plain old immaturity? What ailment afflicts those who believe free speech is a one-way street? And if it is,what law says so? When I was growing up the mantra "sticks and stones may break my bones but names will never hurt me" was the accepted defence against jeering and name-calling. We were told that millions of men had died in wars to defend, literally to the death, our right to a free society; and that freedom has always meant the right to express oneself, however misguided, however distasteful.

We even allow frequent Islamic protesters to loudly and fanatically call for the actual death of all non-Muslims, yet quickly deploy police to turn away those holding counter protests, denouncing those views as hate crimes.

The originators of cries for speech suppression seem to me to most often be those who hold to socialist inspired views, those who have self-identified as victims and those who most vociferously demand the Police uphold their own imagined 'rights' not to ever hear, see or suffer offence. Defend freedom of speech to the death, Lefties? Or defend it only so long as it suits the cause?

Enough commentators over the centuries have made the point for it to be taken as valid, that freedom includes the right to make a twat of yourself in public, in print, on placards; to support or oppose a person a cause or a principle. Laws exist to prevent you from spreading harmful lies in the form of libel and slander. But we already have laws that suppress your right to express your fear or dislike of people who don't look like you. Arresting somebody for merely saying 'out loud' what a significant number of people are thinking is one step on the way to making opinions a legal matter. 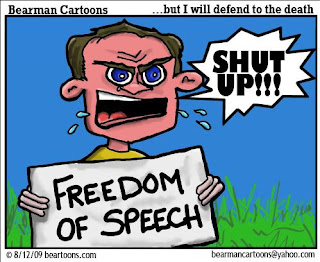 And when we get to that point (this year, next year?) who will decide what opinions are acceptable? In fact, will we allow individual opinion - let's call it dissent - at all? I believe such things have been tried before and Winston Smith would easily recognise the sort of world that creates. What thought crimes have you committed today?

For a more dramatic, close up view of events I urge you to read this blog also, by another Twitter worthy, @fatcouncillor to see how far some people will go to deny freedom of speech.