In Praise of Authority

The experiment has been running for well over half a century now and I think we can all agree it has been an unmitigated failure. Give the next generation a go, they said, the children are the future; they should have a stake in building the world in which we all live. Of course, allowing the young to set the agenda is problematic when they have no understanding of what it is like to be old, to be business owners, to be professionals, to be parents, whereas older people…

Well older people come with baggage, of course; they are ‘Little Englanders, stuck in the past; times have changed; the world has moved on, etc… Maybe so, but there is a reason we don’t let trainee civil engineers design major infrastructure projects; why famous architects are invariably middle-aged; why heart surgeons are likewise advanced in years. Ah yes, but ‘old people’ can’t adapt to new technologies, new societal structures, new ways of being human!

You think? Seriously, you’d condemn the repositories of all that accumulated wisdom, won through experience, often via the hardest of routes, as mere fuddy-duddies? Viewing older people as toothless crusties, addled with Alzheimer’s and re-living a black and white movie loop of a world view is only rational if you are looking down the wrong end of a telescope and processing what you see with an intellect which still believes in certainties. Father Christmas, God… the eternal benevolence of socialism. Give me a break.

The continual pandering of our political ‘elite’ to the narrow concerns of every possible sub-division of society is in no way a solution to the very real problems which face all of us. And so consumed are some of these groups by the very particular individual needs of their caucus that they cannot, or will not see the needs of the rest. Differently abled does not make you uniquely equipped to understand universal issues, often quite the reverse, given their inevitably inward obsessions.

Neither are the so-called ‘lower classes’ the model for democracy fairness and egalitarian reform. And while the image of Britishness may still be represented worldwide by cut glass accents and impeccable manners in the movies, the Eton Set are hardly exemplars of British society. But then, neither are the Angela Rayners of the world, although they really seem to think they have the answers.

Jeremy Corbyn, for instance, wants British children to learn about the “grave injustices” of the British Empire. He believes more ‘honest’ narratives would enable them to develop critical thinking about those centuries of Rule Britannia, global domination and jingoism. A Labour government, he promises, would reform the curriculum. But, see, this revisionist thinking is all just part of the same old problem.

Do you really – really – want governance that examines every tiny facet of your life? Do you want Chinese style social credit scores? Or do you want a system that keeps the arteries open, punishes the bad guys, heals the sick and aims for an ever-better society? If you think either is achievable in short order then you are a dreamer. If you think either is achievable without pain then you are probably still a child.

Whatever system is in place, some will thrive regardless of all the others; some will thrive at the expense of others and some will barely survive through the charity (forced or voluntary) of the rest. And this is also true, that some will fall by the wayside and yet the majority will still grumble about their lot. For my part I don’t have faith in any of our politicians in the west to fix anything at all. I think politicians have become debased by their own illusion of power in conflict with the reality of their true impotence. 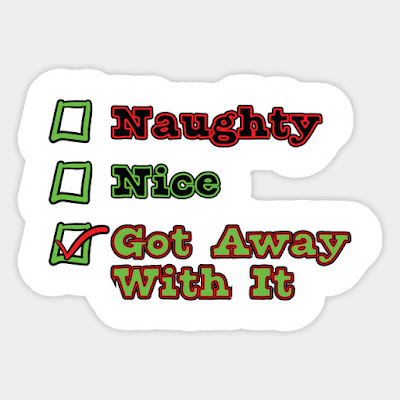 So, maybe we should give up on the experiment and accept that it is time for the real grown-ups to take back the reins now that junior has crashed the sleigh into the snowbank. Santa may be old and tired but he knows the drill; the elves have never been out of the toy factory. And, he knows who is naughty and who is nice… and how to deal with that. Could we be nearing the end of the west’s infatuation with the democratic experiment and ready for the return of some good old-fashioned paternal authoritarianism?
Posted by Batsby at 15:29