Hush, listen, whisper who dares, an internet parody's setting the snares. Some of you followers on Twitter may have wondered where I’ve been or the last week. Well, here’s the story. [Link] In the meantime I have been amusing myself as Len McCluskey, a parody account I created back in 2013 and occasionally use to view conversations involving people who have blocked me. Sometimes I can’t help myself and feel driven to respond, but this last week Len has been reaping a rich harvest, as so many seem to need to believe that a prominent figure really is talking personally to them.

It’s frankly worrying how many people are ready to engage with somebody they either strongly disagree with or desperately want to be accepted by. Len has been busily confounding lots of them who, even when repeatedly told ‘*never trust a parody’ persist in trying to push their point. One punter even seemed convinced that when ‘Len’ tweeted “*Nunquam enim confidunt parodiam” he was suggesting that the punter himself was a parody and carried on for several tweets without grasping the reality. Anyway, I’ll let Len take up the story:

‘Ey, watch out lar, hiya comrades; it’s Big Len McCluskey ‘ere, leader of Untie, the union and future master of the not-so-free wairld. It’s been an 'oot, this week, stepping in for Battsby, but I ‘aven’t been wasting time. No, I’ve been using the platform to clarify our position on Brexit among other things. See people think the Labour Party does what I tell them, but this isn’t always true. Not always. And Brexit is one of those grey areas which needs a bit of attention; so are you paying attention?

Right. See, the official position of the Labour Party is and always has been for Remain. When I say ‘is and always has been’ I mean this, of course, in the socialist sense of ‘whatever fits the narrative today’. Traditionally, Labour has held the moral high ground but Blair and Mandelson and that ‘New Labour’ stinkpile queered the pitch with all their ‘relaxed about people getting filthy rich’ malarkey. Now, this won’t do; Labour and the trades union movement must undo all this ridiculous aspiration and tell the people, once more, what they need to believe in. And, of course, this is Brexit; it always has been.

But we’re not there yet. The bloody referendum made the proletariat believe that their voice mattered, that their vote mattered! Since when has anybody given a fig for votes? Here in Untie we don’t even let people vote, for heaven’s sake; ridiculous idea! Let people vote and before you know it they’ll expect you to respect what they voted for. And where does that end? No this needs to be nipped in the bud. And I have been playing my part; oh yes.

With the unambiguous Twitter bio: “Untie General Secretary, leading trade unionist in Britain and Ireland. Fighting for austerity and cuts in our communities. Doesn't know the meaning of parody.” I have been reaching out to the community. Somehow I seem to have enraged a number on both sides who seem unclear what I stand for. Well, I try to make it obvious that what I stand for is the opposite of what they do, thus pleasing everybody engaging with me, if not necessarily within that particular conversation at that particular time. It all evens out in the end, if you look carefully enough.

But it isn’t exactly rocket science; if you are upset by ‘me’ saying Unite are for Brexit, then hop onto a conversation where I hint that Unite is for Remain. It astounds me that folk can’t grasp that this is how politics works now. Nobody knows, with the exception of the Limp Dems and the Greens [spits] where any party really stands on Brexit and this is because they don’t know either. On balance, if pushed, I came down on the side of Brexit for the following reason, which far too many people accepted without criticism. Are you ready? 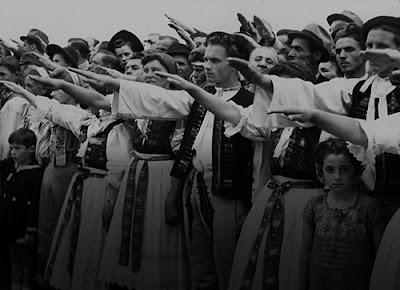 So, this is now the official Untie position. We want to increase the power of the workers. We believe in fair and equitable socialism. We believe in the people of Great Britain; one nation, one leader, one people – power to the people. We intend to hold mass rallies throughout the country to build this movement. Who will join me in establishing a new Socialist Workers Party? One that will work on a truly national level? And if anybody can come up with a snappier title than National Socialist British Worker’s Party that would be really helpful, thank you.


Coda: I have now acquired a little camp follower of my own. He was fooled by the Len parody and he just can't let it go. I'm sure Twitter has rules about harassment and pestering, but it's fine. He has made it his mission to inform everybody who responds to me that I am not me, as it were. The poor wee laddie will eventually tire and weep himself to sleep. If you see hi, tell him I said Hi!
Posted by Batsby at 06:35