I remember, back in the sixties, our next door neighbours were proud to have marched in the Ban the Bomb demonstrations. It had no effect on either government policy or their own lives and when I got to know them a little I realised it was for them just a jolly day out with a bunch of other young people, making a noise for the sake of it and justifying it by pretending to themselves that they cared. They didn’t. Even back then there were families who could survive on a combination of the dole, cash in hand work and the black market. Far from being good little socialists and humanists they were on the take, allowing others to take the strain.

The world faces many challenges and most responsible governments – including our own, believe it or not – are taking steps to meet them. On climate change, for instance, since 2010, the UK has reduced its CO2 emissions by a quarter: 50% more than any other G20 country. And in 2017 the UK cut more CO2 than the rest of the EU27 put together. That was under Theresa May and the Conservatives. Yes, the very same Theresa May the striking children were calling to be fucked. Charmers, aren’t they?

In fact the real thrust of the Socialist Worker assisted kiddy-strike was laid bare in their chants ‘Fuck Theresa May’ and ‘Tories out’ oh and ‘Oh, Jeremy Corbyn’. And many banners read ‘System Change not Climate Change’. The news media delighted in broadcasting lisping infants reading out emotive copied-out essays, but this was no cuddly attempt to bring people together and heal the planet; it was a naked and blatant manipulation of malleable minds.

The left have long argued for children to be given the vote and the far left have absolutely no compunction over weaponising the gullible. They do it with old people, with poor people, with black people, with muslims; they lie to them and tell them how badly they are done by under the hated Tories and then promise to magically tax the country to a standstill to somehow make it all better. The truth of course, is that the UK government record is exemplary in comparison to most of the rest of the world, but the truth has no traction here.

And the truth behind this irresponsible action is that kids were used as a political human shield for the only real aim of the hard left, which is to hold power. Forever. In their warped thinking the great socialist revolutions of the past only failed because of the frailty of corrupt leadership. In their new Utopia without the threat of ever being deposed by the demos, they will finally shape the world in their version of Marx’s image. Religions hold sway over people by telling them comforting tales and damning warnings; extreme socialism does the same. 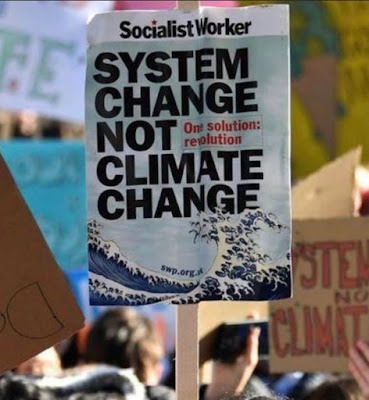 For my generation it was the threat of nuclear Armageddon. Today it seems climate change is the preferred cover. In either case the inconvenient truth is that children, who have only recently discovered the truth about the Tooth Fairy and Father Christmas, are too easily manipulated by the shiny baubles and gewgaws of Socialist Santa and his demonic elves and Friday's so-called strike was a prime example of how easily emotions can defeat facts. Still think we should let children vote?
Posted by Batsby at 08:38