Once again the empty vessels ring out as they revisit knife crime, police numbers and demonstrate their inability –deliberate or otherwise – to  differentiate between causation and correlation. For instance, it is a demonstrable fact that everybody who ever died of cancer was once born thus there is a 100% correlation between getting cancer and being born; the clear fallacy which follows is, of course that cancer is caused by being born, a proposition you can often refute by trying to apply the causation in reverse.

If the sun rises every day and every day there are far more accidents as people drive to work than there are accidents in the dead of night, does this mean that daylight is the chief cause of road traffic accidents? This echoes the old saw that if 20% of road accident fatalities are caused by drunken drivers, the other 80% must be the fault of the sober, so let’s all get pissed and save lives. This isn’t to say that the reduction in police numbers is not somehow linked to knife crime but, as always, a simplistic view makes for far better headlines than doing some solid research.

Everywhere you look people who should (and often do) know better are causing mischief by misusing statistics to tell a story often only peripherally related to those statistics. And depending on from whose mouth the accusations fly the indignation of various groups are triggered. Thus, when Hate-not-Hope[sic] target and intimidate Tommy Robinson’s wife and kids the left, from their lofty moral steeds, insist that all’s fair, yet when it happens to one of their own – Mike Stuchbery, Rachael Cousins – it is somehow due to the rise of the far right.

Oh yes, we’re back to all that. Latest in the attempts to smear ordinary, everyday, majority concerns as extremist is Sayeeda (Baroness, no less) Warsi who states, as evidence of deep embedded islamophobia, that Conservatives have retweeted messages in support of Tommy (not his real...) Robinson. Now I’m not one to start a conspiracy theory, but how convenient would it be for them if attention were to be distracted away from Labour’s anti-Semitism row? Seriously, though, are we to believe that our major political divide is now between islam and judaism? So much for the christian soldiers.

But back to islamophobia. Phobia; fear. When, across the globe, people are being regularly beheaded, lashed, stoned, burned and thrown from buildings and this is earnestly claimed to be the will of allah, is it not prudent to fear such events becoming commonplace? And given the inability of moderate muslims to bring about any cessation of such hostilities, openly declare their allegiance to the umma above all, isn’t it a pretty reasonable reaction to exercise caution in trusting people who identify by religion – any religion - first? 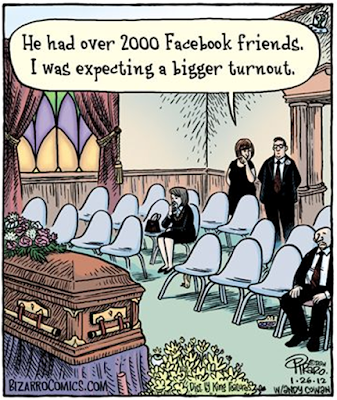 Above all, don't believe it
because it was on Facebook!

How do we deal with all the bullshit, which is woven through all media everywhere? It’s simple, really. Next time somebody trots out a lazy factoid – like a fact, but only superficially so – challenge it. Assume every news story is simply a version of the truth and that all out of context words, actions, numbers and even images can be and often are employed to tell a story quite different from the actual events. Keep an open mind but question everything, but most of all ask yourself, what really happened here... and who benefits from the version being told?

Email ThisBlogThis!Share to TwitterShare to FacebookShare to Pinterest
Labels: causelation, correlation and caustion