A recent report has revealed that the children of women who suffered stress during pregnancy are more likely to develop mental health problems by the time they are thirty. Labelled ‘child personality disorder’, presumably to generate a new income stream for those who diagnose such things, it manifests itself as an excess of  anxiety, emotional instability, anti-social behaviour and even paranoia. In other words, immaturity. Quelle surprise!

As with all such revelations it should be taken with a pinch of salt and a great deal of scepticism. With a bit of redrafting the conclusions could have been a much more credible; ‘stressed-out mums create neurotic kids’. It is well-known that the children of adults in difficult circumstances have far poorer prospects than those brought up in secure, happy, well-balanced households. Why should these redundant ‘new’ findings raise even an eyebrow?

But this is not to dismiss this latest example of stating the bleeding obvious as entirely irrelevant, because it is a well-established fact that certain personality types are difficult to live with and cause trouble in all sorts of unpleasant ways. Pandering to them, as our nice, usually pretty tolerant society tends to do, doesn’t always help; this is how we end up with tyrannical infants pulling temper tantrums and embarrassing their parents, or ego-maniacal talking heads in positions of influence, whipping up a storm, But enough of Owen Jones.

Actually, no. Owen Jones may well be the prime exemplar of the stressed-out mother’s progeny; and if she wasn’t stressed out during pregnancy she really ought to be now because Owen, in common with many high-profile figures, is exhibiting signs of a deep and chronic mental disorder. One of the obvious signs of mental imbalance is an inability to recognise when you are out of whack with those around you. So unaware are they of their own extremism that they think it is perfectly normal to predict the direst of consequences, repeat the craziest of conspiracies and liberally insult and demean those round them.

People, undoubtedly, are a product of their environment – in the case of Greta Thunberg possibly a product of THE environment - but Greta at least has an excuse in the form of a diagnosed autistic spectrum dysfunctionality. But what mitigation can we offer in defence of the derangement of Jones and Soubry, of Campbell and Grieve, of and Hammond and Umunna? (Oh, wait, sorry: Chuka’s issues are entirely due to his own misplaced high self-regard and delusions of relevance.)

The rest of them, though? It has been called Brexit Derangement Syndrome and in homage to their identifying hashtag Full Blown Psychotic Episode. Whatever you want to call it it bears all the hallmarks of a genuine mental illness and it is rife. The only likely cure is a form of immersion therapy, with a deep and rapid exposure to the cause of their anxieties. The only thing that can cure the rabid FBPE crowd now is Brexit. Not your cautious soft Brexit, nor a Norway option but a full-leaded, no safety net, no-going-back, Brexit Maximus. 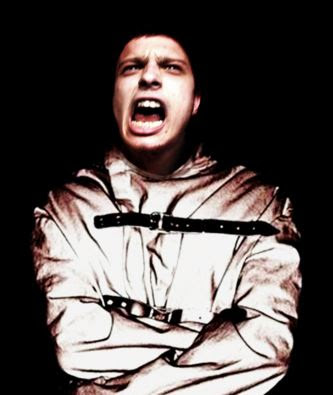 Help them; before it is too late.

Much ballyhoo is being made in Parliament – a major nexus of the sickness – of the attempts to prevent the Prime Minister from carrying out the job he was elected to do. But he must be allowed to administer the medicine or else the disease will spread until it affects the still-functioning organs. It is far too late to treat it locally and only an amputation of the infected parts can bring about a cure for what remains of us. We absolutely must leave now – before the entire country goes mad.

[Coda: Some mental Tweeters have started to add a black dot to their profiles in order to claim they, or somebody they know WILL DIE as a result of Brexit. This isn't just a bout of midsummer madness, it is an epidemic.]
Posted by Batsby at 12:01