Happiness, sang Ken Dodd, happiness, was the greatest gift that he possessed. Gift in this case meaning gifted by god, by nature, by providence or, just possibly gifted by himself. So precious is this gift that the pursuit of it is enshrined in the US Declaration of Independence, alongside life and liberty. But while life and liberty are granted as ‘unalienable rights’ even the Founding Fathers recognised that that happiness means different things to different people and thus it was up to each as individuals to pursue their own with no guarantee of success.

So it is somewhat presumptuous of Jo Swinson, the new and excitable leader of the Illiberal anti-Democratic Party, to propose the appointment of a Minister for Happiness. For a start, what can she mean by happiness and how would we measure when one has achieved it? Will we have to regularly report our state of elation to government auditors for assessment? After all, if you are going to create a ministry how will it know when it has achieved its stated aims and will it have to define an acceptable type of happiness; will happiness be regulated, ordered, monitored and corrected, or will we be granted the liberty to define our own?

But just suppose happiness – and bear with me on this as I riff – is, you know, a by-product of many other things, such as being comfortably well-off, having a sound roof above your head, being fed and watered and decently clothed. Being free of worldly concerns has to contribute to the sum total of contentment but humans have a habit of finding misery even amidst great wealth and comfort. So, I’m guessing the new ministry would have to also consider removing the impediments to joy which thwarted ambition, failed relationships and loss bring.

Perhaps we could also have ministers whose purpose is to ensure good educational outcomes, healthcare, stress-free and efficient transport, agricultural productivity, environmental security and, say, equality and human rights? If only these had been considered by earlier administrations then we wouldn’t need Jo’s blue-sky, outside the box, radical, direct-to-the-heart-of-the-matter prognostications. Better still, to make us feel better than ever, why not a minister for self-esteem? See, these are classics of student-level, socialist groupthink; ‘if only everybody could be more like me… let’s legislate!’.

It turns out, on further investigation that we already have (who’d have thought it?) ministries to deal with all the above and more. And we have more advisors on health, wealth and happiness than we have ever had. The internet is awash with people making themselves very happy indeed – and smug – by telling everybody else how to achieve a nirvana just like theirs. And it is a crock because what makes you wriggle in delirious delight may well make me squirm in revulsion. We no more need a minister for happiness than we need one for breathing.

But, you know what is good for happiness, for self-esteem, for all-round well-being? It is a sense of being in control of your own destiny. Give people the tools and the wherewithal and they will work out the rest for themselves. Educate them, provide meaningful, well-paid work and a sense of community and responsibility and they will become better people. Free them from the shackles of groupthink and suddenly the whole group is healthier. 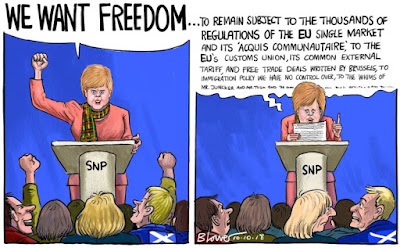 Real freedom - not those 'freedoms'.

As a nation the freedom to pursue life, liberty and happiness will not come from being shackled to a moribund rules-obsessed monolith which believes it can legislate people better. It will not come from a one-size-fits-all approach to every part of society. It is in the Declaration of Independence, Jo! Freedom from those Newspeak 'freedoms' of the EU. Happiness comes from pulling up your socks, getting up off the bench and walking out through that open cell door. Brexit has opened the door for us – let’s get the hell out before people like Swinson slam it shut again.