A week ago, I read an article in the magazine for the American Association for the Advancement of Science which suggested that the warnings of future high temperatures are implausible, based on flawed modelling. In advance of the release of yesterday’s deliberately emotive and alarming ‘CodeRed’ report, the writer is, basically, trashing the science. A bit, at least.

But here’s the thing; who do we trust? The world of scientists who make a living from predicting gloom, or the more moderate voices advising caution? Do we listen, even, to the outright sceptics, who have their own science which tells them what they want to hear? While I am perfectly capable of listening to an argument and, indeed, of being swayed by it, I simply do not have the depth of knowledge to decide whether it is true or not.

Almost whoever you are, you require a leap of faith in forming your opinion because we are talking about the future and literally nobody knows the future. No matter how hard you try to persuade me of ‘the facts’, ‘the science’ or the credentials of those whose homework you are copying, you still don’t know. They don’t know. Your opinion, as much as you believe it to be founded on absolute truths is just that, your opinion. As is mine. We may both be wrong.

When it comes to climate change, I’m not going to even attempt to either dispute, or support, the veracity of the warnings. What I am far more concerned about is what is really likely to happen as a result. Announce a possibility of toilet roll shortages and people will flock to the supermarkets to create a toilet roll shortage. Announce a climate emergency and watch as humanity does its absolute best to make damned sure it comes about.

Not being able to buy your favourite pesto because of ‘bloody Brexit’ is one thing. Being denied the use of your actual country because of an overwhelming deluge of climate refugees is, I might suggest, a calamity on a slightly more serious level. Tell the teeming masses of the medieval continents that they will suffer drought, floods and starvation because of the industrial actions of the West and you can pretty much see what comes next. (See also, slavery…)

Forget your electric cars and your hydrogen boilers; no amount of technology is going to crack this nut. In order to make their point the IPCC report has gone full apocalypse and all but admitted that nothing can really be done, even if all the world’s governments sign up and then actually keep their promises (and this is far from likely). So what? Not reaching unreachable targets isn’t a big stretch for the imagination. But introducing measures which restrict people’s access to resources is like inviting them to raid the stores before the shelves are empty.

“If we don’t act now, it could become irreversible” is an invitation for all to conclude that it is just too late. They may as well have yelled “Last orders!” in a crowded English pub. Meanwhile, those who are really affected by climate change (clue; it is not the developed west) will seek to abandon their desiccated land and head for greener pastures, just as those who tend the pastures are crippling themselves with debt. 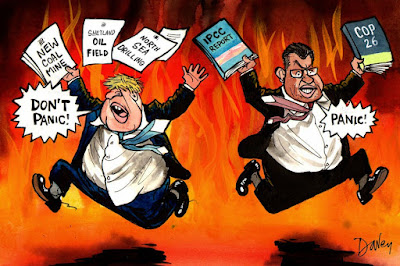 The big deal is not whether or not we can arrest or even reverse climate change – a great many in the know think we can’t, or that it will be too little, too late – the big deal is how we cope with what’s to come. Were it just Little Britain we could probably manage fine, but just watch as the trickle of climate refugees becomes a flood and it floods our way. Sod your electric cars, go and buy weapons; in a few years it will be every man for himself