Who Collects The Bodies?

So, the loonies are right and just before Christmas the hands on the levers of power tinker with the 5G signal and across the world (5G coverage allowing, so not much of the world, then) we, the vaccinated begin to drop dead in droves. What happens then? I mean, let’s say everybody with the jabs within a half mile radius of a 5G mast just tumbles, poleaxed in the street; who collects the bodies?

The answer, just staying with the premise a while longer, is nobody. Mostly, I expect because by then those who currently seem to know anything will have convinced themselves that the vaccine itself is transmissible by contact. And given that the vaxxed outnumber the anti-vaxxed considerably, what an impossible task it would be. The streets will be blocked by corpses and the Tesco and Amazon deliveries will be halted (it is likely all their drivers have been jabbed anyway). Everybody will starve.

Then the scavengers will come, the deadly disease will pass into the crows (family corvidae) and mutate to form a new threat to civilisation and Greta’s dreams will all come true. The majority of those spared will be young, dumb and full of dogma and dreams and incapable of running a society. All those isms competing for attention, all that tech collapsing for want of electricity, economies crumbling before your eyes. How does any of that benefit ‘the elite’ in any way?

Putting aside the veracity of the pandemic for now, how does removing at one go the repository of the majority of human experience and knowledge, help? At the vaccination stations were there special batches of placebo to be administered to chosen volunteers? Did your local GP surgery scrutinise your CVs for evidence of your usefulness in the new world order? Surely such a well-planned, long-planned worldwide control event would not have left to chance who lived and who didn’t? That would be madness.

Ah, but, no, say the placard wavers. See, the vaccine makes you infertile and population reduction is achieved that way. So, not the 5G then? No, the 5G conspiracy theory was just a bunch of lunatics with their own agenda. Which was? Well, they're just mad. And how are they different from any other group with fixed ideas and an agenda? That’s not important right now; infertility, that’s the thing. The majority of the vaccinated are well beyond peak fecundity. Well, all we know is we’re not having any of it.

And that appears to be where we are. A world-wide plot by shadowy ‘elites’ to crash their own parties and reduce their mansions to hovels? Without thriving economies the next generation of the powerful will not be the woolly-headed, liberal, social media billionaires, it will be warlords. It will be those who can seize power the old-fashioned way. In acquiring great material means you have to climb to the top of a pyramid of wealth. In acquiring simple power over others, you just have to hack your way to the top of a pyramid of bodies. 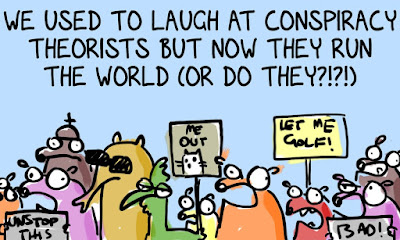 The elites don’t benefit from any of this, and neither do governments. Nobody in current positions of power and influence will benefit in any way from a dissatisfied population of the unemployed and disenfranchised. So, if it isn’t the currently powerful who are manipulating the world, who is it? Follow the money, says the freedom crowd. I have. It leads nowhere.