It’s everywhere you look. The handy labelling of anything you like as anything you want it to sound like. Tips are now reframed, gloriously, as ‘life hacks’, imbuing them with a vitality they rarely deserve; all those click-bait pages telling you how you can’t live without them. Since the word ‘essential’ was attached to entirely unnecessary things back in the 80s, ancient artisan lore has been repackaged as if it were newly discovered intelligence from a distant galaxy.

The knowledge that was once handed down in the family now appears as revealed texts from the lost books of ancient cultures, otherwise known as the Internet; the place where everybody goes to slap each other on the back, form cult-like echo chambers and invent ever more ridiculous shorthand for perfectly normal things. Stick an ‘i’ or an ‘e’ in front of a perfectly ordinary doohickie and watch it become an overnight sensation of new-age awesomeness.

Likewise, in social discourse, there has always been an inter-generational disconnect, the young necessarily wanting to confound and conceal from their elders the exciting [perfectly normal] things they are getting up to. The invention of new words, or the recycling of very old ones is nothing new. And thus ‘chillin’ makes idleness sound productive, just as some have convinced themselves that ‘social media influencer’ is a worthwhile way of avoiding a real job.

Words are also used as weapons and an annoying interlocutor can be dismissed as a racist, a fascist, or even go for the jugular with a 'literally Hitler'. One of the interesting ways in which the demented left is currently tackling their cognitive dissonance over the embracing of islam – an ideology entirely at odds with everything they think they believe in – is to pretend that the biggest threat to society right now is far right extremism.

They label everything they can’t comprehend as ‘far right’ without the slightest consideration of what they believe the far right to be. (If you examine the ‘far right’ you’ll find it is, essentially, communism with more tattoos.) This would be absolutely fine, if everybody possessed the intellect to rise above it and see it for the hollow and insubstantial branding it really is. We all do it, by the way, left and right, old and young alike.

Governments do it too, and then it gets problematic. In an effort to communicate with the hoi polloi, government spokesmen and women alter their speech patterns and use words in ways that perfectly illustrate how unfamiliar they are with them. Politicians never look less in control of their brief than when they try to adopt the accents and idiom of ‘the youth’ with whom they are trying to connect. When Tony Blair took off his tie, it was meant to signal ‘look at me; I’m just like you!’, but when he compounded this with his adoption of the glottal stop he just came over as yet another plank trying to con the masses.

And of course we’re doing it all over again with the pandemic. Already today I have seen doctors trying to persuade people to have the vaccination being described as Nazis. Terms like ‘clotshot’ and ‘killer vaccine’ only serve to over-simplify everything while revealing your credentials to all who read. On the other side, it transpires, shorthand such as 'anti-vaxxer' and 'rabid conspiracy theorist' enrages many who may have perfectly legitimate grounds for their caution. 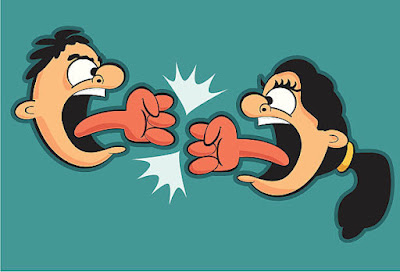 The truth doesn’t seem to matter in any of this, and the adoption of the right collection of phrases identifies you as being on one side or the other just as readily as does a badge or a placard. It seems to be a default setting for Human Mk 1, to coin a phrase, but I’m not convinced it is all that helpful. I’m even suspicious that some people take up a side based on which has the cooler language, the slicker patois, rather than what that side actually stands for. There’s nowt so queer as folk.

Email ThisBlogThis!Share to TwitterShare to FacebookShare to Pinterest
Labels: War of the Words