The rebels failed to block the government's intention to do something the electorate actually welcomes – slashing the foreign aid budget. When I say ‘the electorate’ I, of course, refer to the majority of the population, those people whose votes put governments into power but whose opinions thereafter are unsolicited and routinely ignored. If governments could do away with elections altogether they probably would.

But there are other people with votes. Many fewer people but with more important votes – they think – than the lowly hoi polloi. These far more worthy, far more moral people often hold views which are incompatible with the masses they rule over. Every few years they court the power-giving votes of the great unwashed; we’re listening, they say, but we won’t remember what you said after we take charge.

And then they spend our collective money without asking whether we want it spent. To justify foreign aid they talk of soft power. We are buying influence, they say, we are standing tall on the world stage, we are oiling the wheels of international trade. Well, if we have something worth trading why do we need to offer bribes? Who are we trying to influence and why? Have they never noticed that those despotic regimes they prop up in return for arms sales actually hate us?

Foreign aid, they say, is a small price to pay to retain our standing, and to assist the poorest people in the world. Well, how about dealing with the poorest people in the UK first? Show us how buying gold-plated Mercedes for corrupt dictators translates into roofs over the heads of our homeless. Show us how, for every cruise missile B.O.G.O.F. token we send abroad exactly how much is poured into UK social care.

Why not be open about it, instead of deciding that we mere voters will never understand how oh-so-clever you all are? You never know, a little bit of honesty could go a long, long way. But what am I saying? Despite all the talk of transparency over the last few decades the machinations of government are as opaque as ever. I get that there must be secrets; I don’t get why we often appear to reward those who despise us before we take care of our own.

If the politicians can’t see it, the electorate is all too aware of the massive disconnect between power and the people, and foreign aid is just another one of those policies which appears to be a one-way, wrong-way street. We open the door to invasive immigration, we create dependencies we can't afford. We are less safe, not more secure, as a result of some of our foreign policy. 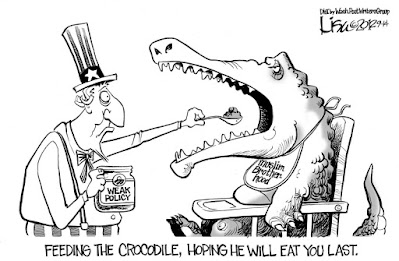 Those worthies who wish to continue funding foreign despots can always throw their money at the innumerable charities founded to do exactly that. They can see the larger part of their personal donations pour into the greedy pockets of the directors, and maybe in doing so they will experience the dismay the rest of us see when the taxes we have no choice about paying are frittered away. For the majority, however, charity must surely begin at home.