As the heralded end to Covid restrictions has come and gone and predictably under-delivered, the chatter turns to the carnage caused by the continuance of test and trace. As an idea to prevent the spread of infection it has laudable aims. But given the choice, many will refuse to use it, or else ignore its advice. If you get paid by the hour and you can’t work from home and you have mouths to pour food into, why would you respond to a machine telling you to self-isolate when you are fit enough to put in a shift?

When it comes to doing your duty by your country you have to be persuaded that your sacrifice is worth it. For a great many, protecting a third party from a harm which seems slight and a probability which is small, sacrificing your ability to make a living is too high a price to pay. Men who would lay down their lives for their country are unconvinced that staying off work to protect Janice in the office from getting a sniffle is a noble effort that anybody will recognise or reward.

Underlying all the chaos is the burgeoning suspicion that something is off. We couldn’t afford social care yet the government put half the workforce on furlough for a year. We can’t build enough houses for our own people but we continue to import hundreds of thousands of migrants, many of whom will breed but never work. The wearing of Christian religious symbology is considered offensive to muslims, but mass gang rape by muslims is excused as a mere cultural foible.

It goes on: the vanishingly small proportion who are genuinely transgender are treated like royalty, but women who don’t want biological men in their private spaces are vilified as hate campaigners. Statues of historical benefactors are torn down and tributes to violent criminals installed in their place. And everywhere across the left the madness of critical race theory has driven white academics insane while black activists have become power-crazed.

The world is pretty mental right now, with the west appearing to fight many battles on many ever-shifting fronts. So it is little wonder that people, driven batty by lockdowns and masks and social distancing and unfathomable ‘bubbles’ are looking for reasons. And you don’t have to look very far; Twitter appears to be operating as a machine to generate irrationality.

Every political event is imbued with meaning; every meeting of leaders and every photocall open to alternative interpretations. Rumours are treated as facts then fetishised as absolutes. And every possible distortion of history is deployed to demonstrate how this is not only orchestrated, but has been in play for decades if not centuries. I am frankly surprised that Nostradamus isn’t credited with predicting it all, nay starting it all.

Social media has become an even more toxic environment than before with any position open to challenge, including no position at all. Shoehorns are being pressed into service to make the wackiest of intentions somehow fit events as observed. And it all comes down to how you view the balance of power and how it affects liberties most of us have never exercised. My life has hardly been affected, but that isn’t good enough, it seems.

What is absolutely clear, however, is that the whole truth will never be known, but even if it was, the myths will persist to obscure it. Some people will grow old believing they have been victims of a global plot to suppress their life chances and will likely hold such grudges to the grave. But just look at it all. For a plot it is pretty aimless. For a tool for control it is all pretty blunt. As a plan to depopulate it has proved hopelessly inefficient. 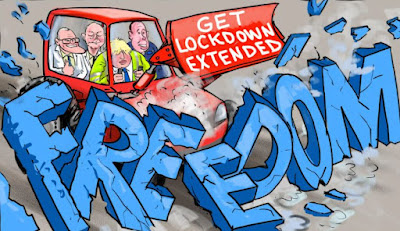 What? You think anybody is in CONTROL here???

Whatever you think is ‘really’ going on and for whatever reasons you can surmise, what is utterly lacking is a unifying theory which explains everything. Well, I think I have one, and it is this. While there are some pretty nasty people in the world and there are those who seek to exploit others, governments are neither as omnipotent nor competent as any of them would like to believe. Governments don’t so much act as react. And there’s been this bug going around.