As the foolish footballing farrago of imaginary hate crime continues to dribble on, the conclusion held, it seems, by all politicians and other bloviating commentators is that we are all racists now. It’s official. And, of course, like every fad, once everybody has got one it ceases to hold any allure. So it is that the rabid pursuit of offence in every single thing has ended up at the only destination possible; Ladies and gentlemen we will shortly be arriving at Worthlessness.

And yet embedded, institutional, systemic, structural racism is on every media tongue. It is touted by the newspapers, by the broadcasters and most especially by social media. Once again, the commentariat misses the point. It’s too late, it’s over, it is yesterday's grievance. Like I imagine a majority of ordinary folk, I am less concerned about racism with every day that passes. Leveraged to gain overtly political advantages, it has ceased to have any relevance beyond the cringing, chattering classes who have boarded the guilt train. No guilt here, and as far as I’m concerned BL simply don't M.

But the bandwagon still has a lingering momentum, as it lurches downhill and trundles towards the gutter of history. Just as with a cornered rat, fighting for life, the struggles and screeches of the race justice warriors become ever more frenzied, ever more strident, as they lose purchase. A few decades ago racism was firmly on the retreat as most people accepted we had a mix of ethnicities in our national make up, but that we were all people after all. But a gradual slide into harmony wasn’t enough for some.

When racism has become a minority proclivity, what is the point of ‘anti-racism’? All it does is create pretend victims in order to foment outrage. But it has overplayed its hand and nobody believes it any more. It is like hope-not-hate which clumsily tries to pour opprobrium over anybody who dares to criticise islam – ersatz blasphemy law in action. Saying you are an anti-racist is not saying you are not a racist; it is saying you have signed up to that new religion of self-loathing, hair shirt wearing anti-white activism.

As an overt ‘anti-racist’ you are literally judging people by the colour of their skin. You are judging those almost 100% non-racist white people to be the opposite of what they are. In fact, you are judging them to be just like you when in reality they are better than you. Not through any entitled, anti-racist, nonsense term such as ‘white privilege; they are better than you because they don’t judge you, they pity you your poverty of ambition. They pity you for your adopted victimhood.

Yesterday, somebody resurrected the text of Boris Johnson’s infamous Piccaninnies article, in which he was taking the piss out of Saint Tony Blair, casting him in the guise of the great white saviour of colonial times, bestriding the globe and bringing salvation to the dusky inhabitants of less enlightened continents. For those who are interested, this article is a handy read because it sets out quite simply why there is nothing to see here. 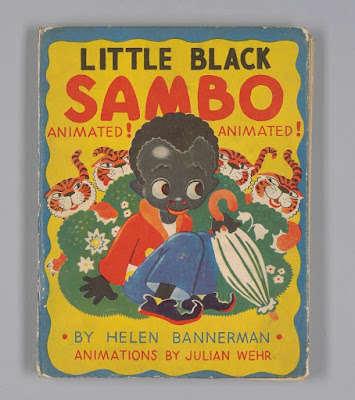 They'll be banning this next!

But the truth has no place in the discourse of racism. And the abandonment of historical racism is a truth which will not be acknowledged, no matter how long ago. Imagining that they have a superweapon against which the ‘far right’ have no defence, the term racist is used on every occasion to stifle debate. But you know what, fuck them; fuck them all. If the price for being the boy in the crowd is to be slagged off as a racist, bring it on. Marcus Wotsisname is... English. There, I said it, and I don’t care who knows.

Email ThisBlogThis!Share to TwitterShare to FacebookShare to Pinterest
Labels: Piccaninnies