There are a lot of screechy voices about at the moment, stirring up unrest and unease and creating a climate of hysterical fear. “It’s all about control. It’s about influencing behaviour! The elites want you compliant and controlled!” Put like that it certainly seems sinister but wasn’t it always thus? What government doesn’t want a population who generally behave responsibly, pay their taxes and stay out of trouble? What employer doesn’t want a workforce that turns up on time and does what is expected?

And don’t we all engage in influencing behaviour throughout our lives? Most parents school their young to be good little humans, don’t they? We alter our own behaviour in order to influence others when we want them to like us, to buy from us, or when we perceive a threat to our safety. We seek to influence political direction by using our votes – and political agents seek to influence us to give our vote to one party or another.

It’s move and counter move – whenever ‘alternative’ ‘free thinking’ movements spring up it isn’t long before the emblems of individuality become mass produced and turn into uniforms. It happens all the time. In fact, it would be extremely odd if governments weren’t trying to influence our behaviour – to lead more productive lives, to be better educated, to look after our health better, to be more resilient to changing circumstances. Save more, exercise more, spend more, play more; for goodness sake, be happier!

And just because you want to believe you are being coerced negatively doesn’t mean you are or you aren’t. Your dog spits out its medicine and views you with suspicion. Your cat goes into hiding when it spies the dreaded vet cage. Your kids ‘hate’ you when you deny them their ‘human rights’ to do whatever they want to do. And yet all you want is the best for them. Is it not possible that governments are just behaving as you do yourself?

Humanity is possibly defined by its deliberate attempts to engineer consensus – the lion just eats you, but the human persuades you to eat yourself. A healthy dose of cynicism alerts us to the possibility of harm, but it doesn’t take much for that to tip over into paranoia, especially when you can go online and find others – plenty of others – who appear to think the same. The weaponisation of what has been termed ‘motivated reasoning’ has been well studied in recent years, especially since Trump’s conspiracy-fuelled presidency.

There is a natural human tendency to believe whatever satisfies our preconceptions, regardless of its veracity, and the Internet is awash with fodder for the hungry. It has been referred to as an ‘infodemic’, a preponderance of information, misinformation and deliberate disinformation to satisfy whatever validation you crave. And some succumb to the collective narcissism that pervades groups with noble aims to restore ‘freedom’. Who doesn’t want to be a freedom fighter, eh?

Long after the facts are laid bare, picked over, interpreted and disseminated, there will be some, perhaps many, who will genuinely believe that they resisted a sinister new world order attempt to shackle them to the yoke. It wouldn’t surprise me if the weekend Freedom Marches continue long after Covid has been forgotten, becoming a regular family day out for the disaffected. We do, after all, seem to have become a nation of protesters of late. 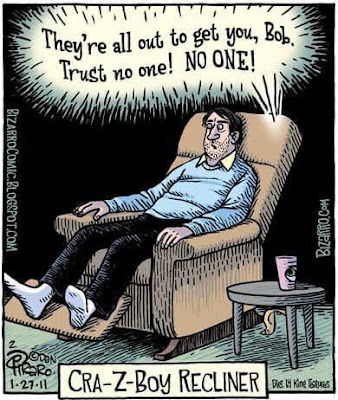 Believe whatever you wish, but just think about the smorgasbord of plate-ready theories out there for your perusal. Wherever you look, somebody is busy joining the dots, exposing the deceits, aligning the planets, waking up, or just plain making mischief. Why should you adopt just one theory when there are so many to choose from? And hey, with a bit of creativity, maybe you, too, can come up with a new twist? A customised madness, all to yourself.