The country has largely forgotten about ‘Tommy Robinson’, the controversial but undoubtedly brave man who spoke up against muslim provocation and violence and paid a heavy price for it. You may – irrationally – hate the man (hatred is an irrational and emotional response which benefits nobody) but he was emblematic of the need to stand up against a tide of frightening change, a change evidently unchallenged by those whose role it is to keep us all safe.

Naturally, the powers that be were, and remain, horrified by his very existence. In the complete absence of action on their part, how dare this upstart be capable of galvanising others into forming a resistance? How dare somebody – a low, uncouth somebody at that – say the things that must not be said? How dare an unelected figurehead do the things the elected dare not do?

Whatever you think of Stephen Yaxley-Lennon he did command the floor at the Oxford Union, having been invited there to be made a figure of ridicule. He engaged with a number of muslim groups, mostly hostile to him, in order to better understand what was happening. He was set up, time after time, and he was provoked far too often, as he later recognised himself, to physically fight back. But he learned from this.

He was very publicly vilified, long after he denounced the English Defence League, which he acknowledged had attracted the wrong type of people and had the wrong type of approach. If you wish to meet violence with violence you need the forces of state on your side, something he never had. Indeed, there was a prolonged period when it seemed that the police were under orders to prevent him from having anything approaching a normal life.

As a result of concerted actions by the police themselves, various disturbing muslim activist groups such as Tell Mama and Hate not Hope he was harangued and harassed wherever he went. He was denied platforms, as one by one his social media accounts were shut down. He was jailed several times, often on grounds which seemed tenuous at best, and appeared to be handed down sentences far in excess, one imagines, of those that would be dealt to a muslim transgressor. Hell, there is no doubt about it; he was targeted by agents of the state.

Not to defend him, because he did do some stupid, vainglorious things, but for what it is worth I tend to be on his side. What he is against is something we should all be against. How he went about it might not seem wise, but how many of us would have carried on, as he has, in pursuit of something he believes in? He has had his family life wrecked, been made bankrupt and had his ability to earn an honest living effectively taken away.

Why am I writing this now, when everybody has quietly forgotten all about him? He is in the news again because he has been landed with ridiculously high costs in his latest unequal brush with the law. Ask yourself whether a single penny would have been demanded had the adversaries in this case been the other way round. Or, you know, don’t bother; you have probably already adopted a position on the man you hate as Yaxley-Lennon.

Was he seeking a place in history? Maybe, I think part of him is driven by the modern obsession with fame. Is he a far-right terrorist, as many will claim? I don’t think so; the term terrorist is applied far too readily by security forces determined to pretend there is a balanced threat to society. Is he really just a nasty thuggish piece of work? Quite possibly, at the start of this crusade, but I think he has become thoughtful and genuinely concerned and has grown into somebody with real, useful insights into this struggle, who ought to at least be listened to. 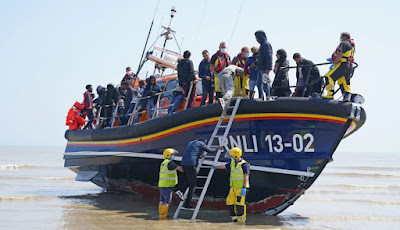 Where does all this end?
But a far more important question to ask is why is he? People like this, would-be heroes, don’t arise out of nowhere. The threat he tried to counter is not only still there, it is growing and remains unchecked. If anything, it looms larger now than anything, as public concerns turns to the millions of people we let into this country without any concern for whether they pose a threat to our way of life. It doesn’t matter if you hate Stephen Yaxley-Lennon, the fact is this country needs a Tommy Robinson. We broke this one; who will be next?
Posted by Batsby at 09:55