We need to talk about Abdul

I caught a tiny bit of Nigel Farage on GB News, interviewing a representative of Amnesty over the influx of migrants via the dinghy flotilla which daily arrives on our shores. Naturally, Mr Amnesty had no questions to ask regarding the legitimacy of theses arrivals, claiming that at least two-thirds will be found to have legally defensible claims to asylum. The rest, of course, he will leave to the inertia of our immigration system, knowing they will be given leave to remain and then conveniently forgotten about.

Local residents in Kent are appalled, with many feeling they are under an invasion which is not being appropriately met by the British government. But, if reports are to be believed, Boris Johnson himself regards illegal immigrants as ‘future taxpayers’ if only they can be given the right to reside here as British citizens. There are many wrongs in that statement alone, but it feeds into a fundamentally false economic premise that we need mass immigration. We don’t.

For every legitimate, cultured, educated refugee who seeks asylum, integrates into British society and becomes a net contributor to the nation’s wealth and wellbeing, there are untold thousands who bring us nothing. Even a net-neutral taxpayer (somebody who pays just under £10k per year in tax and national insurance - salary around £43k) only has to produce a single child to create a net cost for the next 20 years. (And the children of a certain culture rarely go on to become high achievers.)

The Malthusians may well be right, and a far better way of managing affairs might be to limit the population, concentrating on bettering the skills of those who are capable of using their minds and better rewarding those who are most suited to using their hands. I grew up in a Britain where an average-wage worker with a nuclear family could afford to buy a house, but Thatcher’s property-owning democracy seems further away than ever.

The country’s vision and ambitions from the 1980s have been successively torn up, derided and ditched by a series of governments for whom the sole purpose of the electorate is to elect them. And it does not look like getting any better, any time soon. The distractions of the covid affair, the climate crisis, the desire to accuse every Caucasian of racism, and any number of issues of interest only to vanishingly tiny minorities have not changed the clear reality that Britain has fallen.

People like Mr Amnesty and all the other generally leftist forces are engaged in a campaign to legitimise mass immigration from unhelpful, backward cultures as some noble mission. Almost all of these migrants are muslims, fleeing muslim regimes, but they bring the thinking of those regimes with them. Rapists don’t care if the children they rape have progressive parents; if the women they abuse campaigned to bring them here; if the taxpayer they vow to subjugate pay more each year to feed their own enormous broods. They don't care; we, their benefactors, are also the dirty infidels they despise. 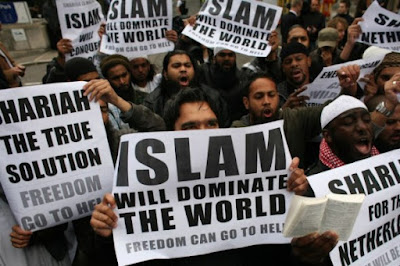 They are DEADLY serious.

At the same time as western leaders ignore the pleas of their people and bring in ever more sub-minimum wage, kebab-economy, unskilled ingrates in the name of a ‘skills shortage’, we are seeing other thinkers heralding the age of AI and automation making labour near obsolete. So, what will we do with the tens of millions of adherents of islam when there is no longer any work to keep their beheading hands occupied? We really need to think again.