Is it just me, or is Angela Rayner actually very stupid indeed? Famously leaving school with more children than GCSEs (not that GCSEs are in any way indicative of intelligence or reason) she has spent the run up to the Batley and Spen by-election positioning herself as Leader-in-Waiting. I say ‘positioning herself’ but is it really ‘being manipulated by Momentum as a useful idiot for a power grab’?

Voted into the Deputy Leader position by the unions, she is a poor running mate for Keir Starmer, who needs no assistance at all in appearing vacuous and policy-free. Because,, of course, that is Labour’s current offering to the electorate, isn’t it? Vot us into power and we will vacillate, procrastinate and wave whatever flags you order us to wave while doing absolutely nothing whatsoever for fear of upsetting the lengthening list of ‘the usual suspects’.

But Rayner? Clumping about wearing the shoes of a teenager and defending that style decision with breathless lack of comprehension she makes Little Britain’s Vicky Pollard look like an exemplar of incisive decision making. Yeah, but, no, bu’ yer, bu’ no… or sumfin’ or noffin’ or wha’ever… It is almost as if the Labour Party are conducting an experiment – inspired, perhaps by BLM, Shola Mugabe Umbongo, the LGBTQI+++ set and others – to see just how far hey can go before the boy in the crowd plays the ‘emperor naked’ card.

You would have to utterly cultified, incredibly dumb or otherwise incapable of independent thought to be able to imagine her, for one second, occupying the post formerly taken by Winston Churchill and Margaret Thatcher. And can you just imagine her on the world stage? Or at the palace? “Yer wha’ yer Majesteh?” The crypt in Westminster Abbey must be practically humming as former statesmen spin wildly in their tombs.

Keir Starmer is, of course, hopeless. Forensically failing to lay a glove on the hapless Boris Johnson, Captain Hindsight is scarcely a challenge – the next election is Johnson’s to lose. But can you imagine even a die-hard communist voting for the flame-haired fishwife unless they somehow believed that they would among the ones to pull her strings? (In which case, they would be even bigger useful idiots then Anj-er-ler herself.) 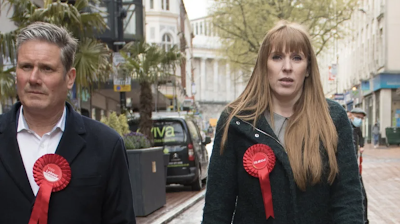 Why are you walking one pace behind me, Ange?
All the better to stab you in the back, Keith.

Of course, whoever leads the Labour Party into the next election already has a fifth columnist ally in place. The fecund and famously cock-led Johnson will, it seems, stop at nothing to bankrupt the country in the name of environmental justice. When you can no longer afford to drive, heat your homes or pay your electricity bill, power cuts notwithstanding, even you may be tempted to give Labour another go…