So much for The Great Reset. The hideously complex wish list of the World Economic Forum never had a chance of getting off the ground. It looks like nothing more than a tidied-up mind-map (another faddish nonsense) resulting from a drug-fuelled weekend among idealists and crazies… and people with far too great a regard for their own influence and power. As a unifying, totalitarian plan for the future it was only ever pie in the sky.

Yes, influencers operate throughout society; from the shouty bloke down the pub, through the fleeting fame of celebrities spouting new age drivel, to the very heart of governments. Your offspring inform you of the imperatives of the day – climate change, human rights, trans activism, socialism, and so on, and you listen indulgently. Government spokespeople spout jargonistic new initiatives to revolutionise society itself. But the ultimate success of change agents has to be measured by results.

And the results are far from the overarching centralised power so many warn against. And look at who is doing the warning: The clearly deranged Kate Shemirani, the serial nutjob David Icke, and Jeremy Corbyn’s even madder older brother. Yes, there are more credible dissenters out there – scientists and doctors and even politicians – but, far from being silenced, they are being heard. Over and over again. In fact, we her little else.

Boris Johnson’s lunatic advisors have come up with some barely credible ideas to ‘save the planet’, but they have been rebuffed and ridiculed as they should be, and nobody has yet been jailed for rinsing their dishes before putting them in the dishwasher. Only today it has been announced that the date for replacing gas boilers has been pushed back another five years. To my recollection this is the fourth or fifth time that unrealistic ambition has been postponed.

All I am saying is what I have been saying – and seeing – for years. As little as you think your vote matters, collectively we actually do influence what governments do. They need to be re-elected at some point but in between elections they float the wildest of ideas, possibly in the full awareness that these are just pipe dreams, and I am sure that sometimes they are surprised by what is accepted and what is rejected. We might not get what we think we voted for individually, but we do end up with what a collective voter base elects.

The plain truth is that we all have our ideas about how we would rule the world, ideas that receive a big slap in the face should we dare to air them. Try it for yourself; make a bold statement on social media of the way forward and see the alacrity of those who leap in to tear down your ideas. This is exactly what appears to be happening around every part of the agenda for this proposed great reset. The bits that stand up will be accepted and adopted. The rest will just be abandoned.

Governments, especially democracies, have a terrible track record in enacting controlled change, no matter how benevolent their intentions. (I really don’t subscribe to the biblical notion of ‘evil’, and never have.) Of far greater efficacy are the movements started by charismatic individuals, as incredible as they may be. I was reminded today of Joseph Smith, who claimed to have been visited by God and as a result founded the Mormon Church. Now, that is crazy, but today there are over 16 million of them, all following a made-up religion. (For the avoidance of any doubt, all religions are inventions of man.)

I’m not alarmed at all. I remain unconcerned about all the clamour in the world today. People are rejecting perfectly good advice and believing the outlandish. But at the same time, other people are listening to alternative voices to the official channels, some of which are undoubtedly sound, while some of the official advice has been shown to be unreliable. How do you decide what is correct and what is not? I suspect we are are all driven more by apparent consensus than fact, no matter how much we tell ourselves otherwise. 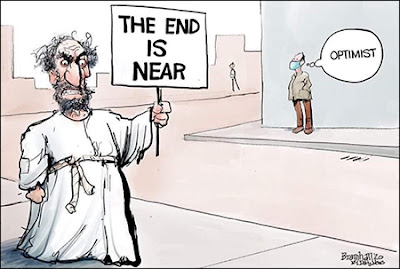 On every subject of concern – climate change, Covid, communism, energy, population, social engineering, and so on and so on – there are as many opinions as there are individuals. An argument that appears to hold water today will be dismissed tomorrow and in a week you may be amazed you ever endorsed it. This will never change, but, as for the much-vaunted great reset, it’s already been reset. Well done, you freedom warriors, you!