In Praise of Populism

I get the impression that Joe Biden and his minions are shitting themselves. In launching his extraordinary attack on the MAGA movement and in naming Donald Trump himself, did he think they were heading off a re-election attempt by 'Orange Man Bad', or did he seek to deliberately provoke such an attempt? Because, if one thing is guaranteed to get the devout to double down it is to attack their faith.

Labelling populism as an attack on democracy, when the espousal of populist causes is virtually the definition of a practical democracy in action seems to me a schoolboy error. Because, in doing so you have to explain what is so very wrong about promising to do what those who vote for you want you to do. Is he saying that what you hope and believe is just plain wrong? Is he telling all patriotic American citizens that they must hand the power to an executive that has no intention of listening to its voters?

He's actually gone much further and said, out loud, that the very people who genuinely believe themselves to be the embodiment of ’The American Way’ are not only destroying the soul they truly think they represent, but that they are actual fascists. Biden has effectively said that Trump is Hitler and his voters are Nazis… which has to be just about the most fucked-up thinking around right now. And this in a climate where many Democrats literally believe that women can possess a penis and men can give birth.

The world is mad. Stark, staring crazy. And the lunatics are woven right through the cloth of society even up to its highest echelons. Something has to give. And when the shooting starts which side would you want to be on; the side with all the guns and the determination to fight, or the side which wants your five-year old to choose gender reassignment?

This is much the same as the situation in the UK where the forces are the old order of family, right and wrong, against the social engineers and academics who think they know better. To band together as a country or to open the borders to all and sundry and pretend this does no harm? To reward hard work and enterprise, or instead fund the ever-increasing search for ways to be offended? 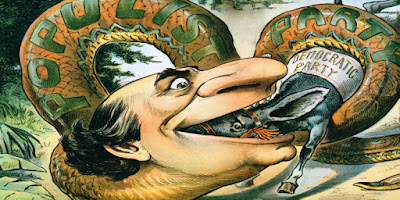 The left will always eat itself.

It’s not going to happen, it’s clearly not. But wouldn’t it be interesting if, by poking the bear Trump is persuaded to stand, then wins and resumes his crusade against the woke. And wouldn’t it be a spectacle if a resurgent Boris Johnson made it back into the big chair and did the same. Because being popular and even populist is not divisive at all. No, what is – literally – divisive is forever slicing and dicing society into as many atomic particle as you can conjure up via the ridiculous notion of conferring credibility on outlandish theories of race and gender and neuro-diversity and all the various fictions dreamed up by those who ultimately contribute not one damned useful thing to life on Planet Earth.

Email ThisBlogThis!Share to TwitterShare to FacebookShare to Pinterest
Labels: Bide and Trump, Trump and Biden, Trump and Johnson