Who could have predicted when David Cameron finally set a date for the referendum he was forced by Farage into giving that we would end up with the second female Prime Minister in our history? But when life gives you lemons it seems you have several options. Among the advice proffered by the internet these are, variously:
Although there is never a good reason given as to why life should want you offer you such a gift the original advice is that when life does indeed give you yellow citrus fruit you should make lemonade. Lemons ain’t so bad when you stop to think about it; it could be so much worse, it could be herpes... or Heseltine. Few can doubt that the Conservative dinosaurs have blood on their hands as regards Andrea Leadsom. She stepped down after a few torrid days of enmity from all sides of the parliamentary party, allowing May to be installed without a fight and without the say of the members at large.

The one constancy in big party politics at the moment is the blatant devaluation of democracy. Across the EU that democracy has been subjugated at the hand of almost faceless bureaucrats who make the decisions that the little people must not be trusted with. It was popularly feared that just as with the surprise outcome of the referendum, democracy was about to produce the ‘wrong’ result yet again. Damn you, peasants! Over the course of the last two weeks the Conservative Party – no amateurs in the political assassination game – have managed to eliminate every last pro-Brexit potential candidate. If nothing else you have to admire the machinations of the house of cards.

But, in grown-up land, things are what they are. Calls for a general election are misguided and will only set back the mission of disentangling us from the EU. What we need to do is get behind our new Prime Minister. Get behind and push. Push back at every potential U-turn manoeuvre, every hint of heel-dragging as we approach that Brexit cliff. When we go, we have to all go over this lovers’s leap together. Theresa May is not most of the population's idea of Prime Minister, but then neither was David Cameron. At least she did say “Brexit is Brexit” and we need to hold her to that. 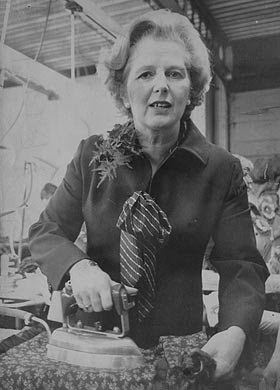 The ironing lady is watching!

So let us watch closely and keep up the pressure to invoke Article 50 and start the formal exit negotiations. Let us make sure she despatches her ambassadorial flying monkeys to every corner of the globe to talk up our country, forge trade deals and show the world that outside the EU the future is bright indeed. In many ways she will have a freer hand than any PM in five decades to take the United Kingdom back to its rightful place as one of the foremost of nations. Let's hope she doesn't turn out to be a lemon... or herpes.
Posted by Batsby at 04:26