US President Number 45 has an impressive portfolio of achievements. Of course, if you hate him, an enormous amount of your brainpower will do its best to prevent you from acknowledging any of them. He’s a billionaire? So what, he’s also had business failures. He donated his presidential salary to charity? So what, he doesn’t need it. Have you seen his First Lady? He’s a misogynist, she’s basically a whore. But he was still elected POTUS, wasn’t he? The Russians did it! He lost the popular vote! Yada, yada, yada...

Teetering on the edge of mental illness, even if Trump ended hunger, eradicated poverty, created peace in the Middle East and solved the climate chaos, the brains of ardent leftists would seize on some forty-year old anecdote about a vaguely off-colour joke. So it is of little surprise that the fake story about Trump and the Gorilla Channel was widely reported and lapped up by those seeking to further bolster their righteous indignation at this ‘wrong’ person occupying the ultimate seat of power.

Claiming to be an extract from Michael Wolff’s tittle-tattle compendium Fire and Fury, the story was put out that Trump watched the non-existent TV channel for up to 17 hours a day. It was picked up by ‘blue check’ celebs and foreign news channels and despite the clearly ridiculous fabrication, there it was; ‘proof’ that the president was a sluggish, immature, vainglorious monster who would unleash nuclear hell on the civilised world.

How the right howled when the hoax was revealed and the hoaxed unmasked as the shallow partisan dupes that they undoubtedly are! But wait. What if this is a double-bluff? What if this entire story has been concocted by the left, to ensnare fellow leftists, solely for the purpose of exposing the gloating, cheering shitgibbons on the right for what they are? How much egg do we have on our faces now? 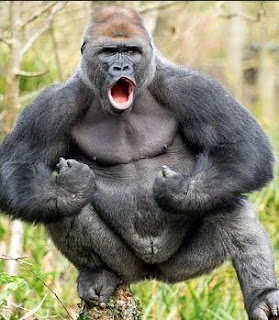 Still the king of the swingers

And here’s the thing; stories like this are planted into the international consciousness for exactly this purpose. Both sides do it. Parody accounts on Twitter whip up storms of outrage on entirely false premises. False comparisons are made, such as Dawn Butler drawing a parallel between Toby Young’s alleged misogyny and John Warboy’s serial rape activities. Honestly, it is so easy to create offence these days when everybody appears to have a hair trigger for outrage and a propensity to join the baying mob.

Look before you leap; think before you tweet. Treat every story that feeds your bias with suspicion and always assume that somebody, somehow is yanking your chain. And when you get flushed out as a dupe? It would be nice to think we’re all grown up enough to admit it, but as sure as I’m sitting here watching the Gorilla Channel for 17 hours a day, I won’t get fooled again.