To have and to have not – the politics of desire

There is a constant background whine of discontent that has been around as long as we have had language; before that even, given that is driven by one of the most basic of all our instincts – survival. In times of scarcity, those who outcompete the others will prevail where the rest perish. It’s what makes humankind the undisputed success that it is, notwithstanding those who blame man for every bad thing that befalls the home planet. But, goes a certain narrative, why can’t we be equally successful? Why can’t I have what he has?

There is an inaccurate but soothing platitude that all men are created equal. Seriously, if you want to believe this then Go You, I guess. But even if you take that at face value and assume that every baby is an equally blank slate, the process of differentiation begins almost immediately. Even if you strip out inherited advantages – money, circumstance, family attitudes, country of origin, etc., the  supposed balance begins to tip right from the off. Some will walk, talk, understand, far quicker than others. Some will be overcome by childhood illness or accidents... or suffer trauma at the hands of those who should care from them.

Even if none of those things happened – or if they happened equally – once attaining the age of responsibility, some will work harder, smarter, faster, longer than others and begin to open up a lead. By their mid-twenties most people have set the groundwork for what follows. Of course, some fall by the wayside, but the mindset is pretty much established and it takes a mighty effort to shift it. Some plough all their energy into the next generation, some – selfishly, you might decide – continue to invest in themselves.

Either way, the world roughly splits into the haves and the have-nots and only the boundary is blurred; at what point do you have ‘enough’? At what point do you decide you don’t? And then, whichever camp you sit in, how do you account for it? The ‘winners’ continue to slap each other’s backs and congratulate each other for their hard work (even those who have inherited every penny) while berating the ‘losers’ for their indolence. The ‘losers’ can do no such thing, so construct a narrative of privilege and class from which they are excluded by some unfair process.

Both narratives have a certain basis in actualité, but one side has no desire to redress the balance; they must be compelled to do so. Thus, the class struggle is the attempt by the have-nots to loosen the grip of the haves on the keys to wealth and power. And replace it with what? An egalitarian, ‘equal’ society? Don’t make me laugh. Those who agitate for the left have their eyes on the prize of power for themselves and this manifests every time a socialist administration is ushered in on the tide of votes of the have-nots, hoping for a ‘kinder, gentler’ politics.

Even if you nominally divided fiscal wealth equally – that which you could seize before it was squirreled away – there is still the issue of influence and favour and pretty soon a hierarchy will be established in which it is secretive alliances which convey power, not the open acquisition of material things. When rich people screw up they become poorer people and suffer the ignominy of public ridicule. When nominally equal party apparatchiks screw up they either get given even more power or they disappear. 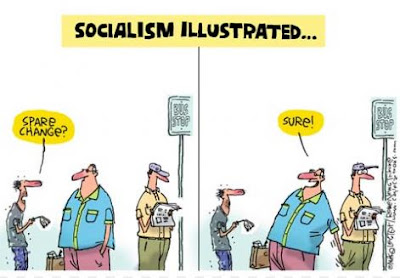 Maybe you prefer that version of society – conform or be removed – where your success depends not on your individual efforts but on how much you further the aims of the ruling committees; on how closely you resemble everybody else and how uniform your actions, speech and thought. Because, if you want an ‘equal’ society, this is where it it is inevitably headed, with all differentiators removed. But regardless of how far down the communist road you with to travel, your imagined fair society has to begin with answering one question: How much of what other people have produced do you believe you are entitled to?

Email ThisBlogThis!Share to TwitterShare to FacebookShare to Pinterest
Labels: equality, haves and have-nots