Oh yes, I’m a bit of a pessimist too. I am not saying that any of the aforementioned things are false, nor am I stating that belief in them is necessarily wrong, I am simply, as defined, a sceptic: a person inclined to question or doubt accepted opinions. But it’s not just opinions; supposed facts often turn out to be untrue, statistics are tortured into admission and the human mind has a seemingly infinite capacity for conflation, preferring the cunning conspiracy to the pragmatic reality that somebody, somewhere just got something wrong.

Scepticism is the primary tool of the scientist, or it should be, and in the search for greater knowledge we must never assume that all evidence is admissible. So excuse me, please, if I am les than welcoming of the current government’s alarming raft of revelations ahead of the budget. Maybe it is my pessimistic nature, forged in the furnace of Great British failures of the past, but it all feels a bit too much, a bit too far and a bit too soon. To me, the goal of #netzero is fallacious and unachievable. I don't believe for one second the much-vaunted diversity of the consultation process includes the voices of informed dissenters from the climate gospel orthodoxy.

Maybe this is just my pessimistic side gaining the upper hand but for every report I read of the miraculous advance of battery technology, there is one warning of the dire consequences of manufacturing expensive, difficult-to-dispose-of, potentially toxic devices. For every study hailing the amazing advance in renewable energy generation, there is a counter argument focusing on the unreliability of such technology. Go nuclear! But, oh, nuclear; isn’t that associated with death and destruction?

The thing is, I don’t know the answer and neither do you. And neither do those who are advising the people who make the decisions; the people who spend our money. Because it is all about the future, it is all unknowable and even after the fact, there will be disagreement about whether what we did was good, bad, or terrible. (And it will certainly have been racist; you can bet your life on that.) 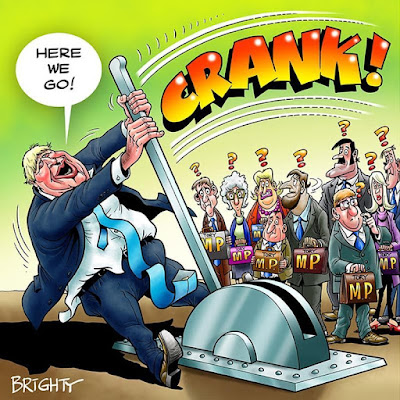 So, where does that leave us? It is often said that it is better to make a decision and live with its downsides than not to make a decision at all and be entirely at the mercy of fate. Given that nobody knows where Boris’s vision will take us and we have no means of stopping this speeding train, we have just two positions to take. Stand on the tracks in a vain attempt to derail it, with a certainty of outcome that would be somewhat sub-optimal. Or grab a flag and cheerily wave to passers-by. I’m still a sceptic, very much so, but for the moment I’m going to get on board and see where it takes us.
Posted by Batsby at 07:12

Email ThisBlogThis!Share to TwitterShare to FacebookShare to Pinterest
Labels: Boris and infrastructure, HS2, Road to Zero