It’s been a while since I blogged. Not for want of inspiration, but out of sheer exasperation at the weeping, wailing, ineffectual, craven nation we have become. The collective ‘we’, in which I no longer automatically include myself, are afraid of our own shadows and despite all the evidence that incompatible alien cultures seek to dominate and destroy us we watch helplessly on as the march of islam continues, unchecked, to take over every corner of our society.

Nantes Cathedral, just like Notre Dame before it, succumbs to some dodgy eleventh century electrical wiring, the imams give prayers and we gawp, open-mouthed, as centuries of our culture disappears in smoke like it never happened. Imagine the outcry if the fire had been set in one of those thrown together, unregulated, ugly blots on the landscape, a mosque. The usual suspects would be up in arms. Literally.

Then there are those ugly-hearted motherfuckers of the muslim Police Association petitioning the powers that be to stop using phrases like ‘islamic terrorism’ and ‘jihadi’ because it portrays the religion of murdering-everybody-who-gets-in-its-way in a negative light. The highly politicised Neil Basu is right up there amongst the self-serving cunts who want to alter our language – ours not theirs, so that it becomes impossible to ever discuss the true threat that islam presents.

Meanwhile the boats full of doctors and scientists and engineers – all of them male, all of them black and every single one of them a potential future murdering jihadi intent on subjugating Britain through concerted islamic terrorism – continue to arrive daily with literally zero resistance to their entry. In fact ‘we’ gather them up, give them blankets and food and clothing and escort them safely to their reward; a life on benefits, courtesy of the British taxpayer.

But where is the backbone of those cowardly officials who have let them all come? Where are the people in positions of power and influence who ought to be setting up machine gun nests to guard our beaches? They are engaged in (yet another) last ditch attempt to subvert democracy through the power of incomprehension. Dominic Grievous's grubby cohorts, finding no evidence of Russian interference in the referendum, seek to portray the failure to find said evidence as absolutely no indication that such evidence does not exist.

In their own warped minds, maybe. But then the anti-Brexit brigade never did care for the exercise of democracy. The contempt they continue to display towards the ordinary men and women of this country who have stood by and allowed themselves to be trodden underfoot, hoping against hope that one day sanity might return and their democratic wishes be delivered is still quite astonishing. And the frothing FBPE hashtaggers are rising, zombie-like from their graves, still desperately searching for brains. 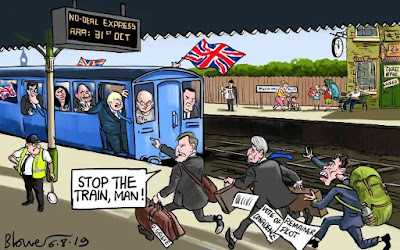 I really don’t know what to make of it all, but I know what I think and I know what I want. If every single islamic terrorist jihadi was pitchforked onto cattle trucks and sent to labour camps I would cheer them on their way. If every single illegal dinghy crossing the Channel was sunk, leaving the occupants to take their chances with the ocean deep I would not shed a tear. And if a latter-day Guy Fawkes was to burn down the whole sorry apology for justice and governance and democracy I would turn out to wave a flag as the disreputable and corrupt Houses of Parliament toppled into the Thames.

It really is a time to talk seriously about a hierarchy of human development and recognise that some humans and some societies are, by all rational measures, worth less than others. This is palpably true, everybody out of the bizarre ‘progressive’ bubble can see this, but all attempts to tell these truths are shut down, because reasons. So, I haven’t blogged for a while; I’ve been bottling it all up.
Posted by Batsby at 06:15