With the refreshing new broom of Priti Patel in the Home Office under the Johnson administration (he who allegedly idolises Churchill) you could be forgiven for breathing a sigh of relief, anticipating a return to British values, common sense, pride and freedom. And with Dominic Cummings in the engine room, pulling the levers and vowing to roll back the recent vicissitudes of the civil service and their apparent conversion to the anti-British cause, you may feel justified in relaxing in the belief that we are in safe hands.

But what’s this? Mandatory diversity training throughout the Home Office? The creation of ‘diverse’ (non-white British) short lists? Indoctrination in the new, revised versions of the past which portray British history as relentlessly negative? Future immigration to bypass white Europeans in favour of what was until recently referred to as BAME applicants? Was this what we voted for? No, it bloody well wasn't.

Last night on BBC Radio 4’s excellent discussion programme, The Moral Maze, the subject under consideration was the morality of the British Empire. I urge you to listen to it, if only for the opening fifteen minutes during which the first witness expounds a thesis of unrelenting negativity and unconcealed hatred of whiteness. The whole programme is little better with all but one of the inquisitors buying into the revisionist version of that period and how it has turned us all into the hideous racists we are.

The drive is on to accelerate the cultural change begun in earnest under Tony Blair. Rubbing the right’s nose in diversity, indeed. The avowed aim of a great many of the ‘new British’ is to eventually eradicate whiteness forever, but in the short term they will settle for our ostracization from our own society. At times it feels as if the whole of academia is dedicated to the single aim of ‘decolonising’ the entire curriculum, whatever they believe that actually means.

To that end, the acquiescence of other institutions is equally appalling to behold. Yesterday Laurence Fox tweeted out the ridiculous cringing statement from RADA, regarding their intent to spend the rest of their days on bended knee to the project of eliminating white talent wherever they find it. Please read it; it is one of the dumbest mission statements you will ever encounter.


Meanwhile, the white working class, as has been the case for some decades now, will continue to be thrown on the scrapheap. This plea from Ben Bradley, MP will fall on deaf ears now, as it has over the years. In Blair’s day his own Home Secretary, Jack Straw, embarked on a war against the very people who put his party in power when he said that ‘the English, as a race, are not worth saving’. 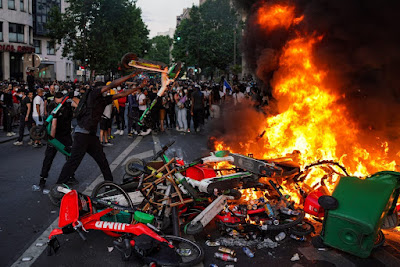 The future, where only black lives exist.

What say the current government? The rhetoric from Number 10 is all about new beginnings outside the EU. Opportunities, they say, abound, as we work to drag ourselves out of the coronavirus lockdown and build our country anew. But just as David Cameron described himself as ‘heir to Blair’, Boris Johnson seems determined to continue in that vein. Listening to the government right now, there has never been a better time to be British… just so long as you are not, actually, British.
Posted by Batsby at 06:57