As usual, the newspapers got it wrong; the historians likewise. When the politician was assassinated, all the commentators – the professors of economics, sociology and politics, the daily chat-show dial-a-quests – declared that this was the start of a dangerous new era of social unrest. All so wrong as to be laughable, were it not so serious. This wasn’t the start at all; it was the end.

But there was still an appetite among the commentariat for there to be a racial motive behind the killing of the UK’s first fully practicing muslim Prime Minister. Xenophobia, the hallmark of the ugly, angry white British savages, must be to blame. Somewhere, decades earlier, the unspeakable act of Brexit had thrust the very worst of humanity to the forefront of politics and this was undeniably the inevitable result. It had been foreseen, and here it was in the flesh.

Populism, they said, was to blame, populism being the pejorative term recruited to replace the difficult concept of popular democracy whereby it was possible to elect ‘the wrong sort of people’. But ‘the right sort of people’ had managed to elevate the son of a bus driver to the highest position in the land. And the wrong sort had killed him. Except they hadn’t. Tariq Hussein had been killed by another muslim. And the reason this had happened was nothing to do with the influence of white populists. Rather, it was their absence which lay at the cause.

Because, long ago, the white people of Europe had been educated by their very own leaders to hate themselves. They had more or less given up on reproducing as they had seen their culture derided, belittled and sidelined. White boys became the worst performers in school and as a result their life chances were limited. White girls became mere vessels for the production of half-caste muslim babies. The old warriors died and nobody took their place. And the only whites in positions of notional authority were dhimmis to the submissive demands of islam.

The first islamic Prime Minister was merely an inevitability of having 90% of the seats in Westminster held by muslims and the rest by an assortment of other ethnicities, none of which had origins in Europe. The few small pockets of white resistance lived on their reservations in the poorer rural areas; old and shabby seaside towns, decaying hamlets in the north, on the impoverished outskirts of once industrial cities. Even had there been the thirst for revenge, the means were simply not available.

A white person travelling in public transport would stand out like a boil, a white, suppurating sore on an otherwise acceptably tanned face. And white people didn’t drive any more, they could barely afford to. So to suggest that this murder was somehow the start of a revolution was so wrong as to be risible. The time for revolution was long past and the urge of the British to bring order and civilisation had been reduced to a simple obsession with keeping neat lawns and orderly herbaceous borders. 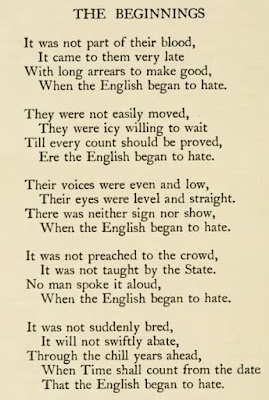 The killer, named in the papers as Aziz Beydoun and pictured with a very full beard and wearing a croqueted taqiyah was nevertheless described as a white supremacist and a member of one of the many banned organisations with roots in simple Christian values. This was accepted by all, despite the evidence of their own eyes, as further confirmation that the extinction of the Anglo-Saxon was both progressive and desirable. Kiplings poem The Beginnings described a lost race; there were now no English left to hate. The new breed would now begin to fight amongst themselves.

Email ThisBlogThis!Share to TwitterShare to FacebookShare to Pinterest
Labels: The Beginnings