A propos my last post - here - I attempted to set up a VPN in order to circumvent the Twitter Stazi, but all that achieved was that my laptop became invisible to the internet... and the internet invisible to it. Not an optimal start, I admit, and not a solution I am eager to try again in a hurry. Before I go anywhere near those sorts of shenanigans I'll need a good boffing up of what in the world I am trying to do.

Maybe, I just wait for Saint Elon to lift all permanent suspensions and I can get my original account back, along with the 9000 or so followers I lost back in 2018. But I suspect that won't happen. The most likely thing coming from the Musk initiative, should it come to fruition, is that I will have to register with my real name and thus invite the possibility of some real whackos finding out where I live and work.

No thanks. The only reason Twitter works for the non-fame-obsessed is because of its anonymity. Have you seen how insipid are the accounts of those who think Twitter is the same as Facebook, or Family Whatsapp? I try to be measured in what I tweet, but sod treading on eggshells the whole time; no matter what you write, the second you express an opinion somebody will be offended and try and have your account exterminated.

What of the other 'free speech' platforms? Gab, Parler, Gettr... John Bulls' Gammon Club (yes, that exists, or existed, at least). They all have one major failing in common and that is that they are not Twitter. In this they are exactly like all those new failed political parties that come along. We have had dozens in the UK over the last half-century, all trying to wrest back power from the government to the people. And all failing for similar reasons.

People take comfort in the familiar, the devil they know, and they tend to believe the propaganda from those self-same devils. Ukip is racist, Gettr is white supremacist, For Britain is a platform for xenophobia, Parler is a platform for holocaust deniers... etc, etc. And so it goes on. And the worst of it is that, given enough time and throwing enough journalism at it, sooner or later there is evidence of misdoings.

Well, of course, but who among us is squeaky clean? And who would really want the squeakiest of clean candidates to run things? You would have to be as pious as a saint, with opinions of such neutrality as to be no opinion at all, and you'd have to have the social life of a hermit. When it comes to it we always end up having to make do with the same government, regardless of the colour of their flag, or the tenor of their song. And as much as we moan about it we know the rules and largely abide by them. 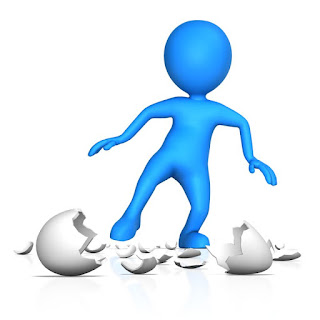 I think what I'm saying is that I don't believe Twitter can change, at least not while recognisably remaining Twitter. And as eggshellish as your presence there may be, it is the price you pay for membership. Maybe after all these years of being a rule follower, my expulsion from the only social media platform I ever got on with means I am a bad boy after all.