They say there’s nothing new under the sun. Every generation discovers for the first time the hitherto unknown activity [whispers] ‘sex’ and every generation metaphorically re-invents many wheels. Human society – its morals, its sins, its hopes, dreams, crimes and calamities - and every social phenomenon has its echoes in times past. I was reminded of this last week when I heard on the radio, in the early hours of the morning, the short poem by Bertolt Brecht: Everything new is better than everything old:

How do I know, comrade
That a house built today
Has a purpose and is being used?
And that the brand new constructions
Which clash with the rest of the streets and
Whose intent I don’t know
Are such a revelation to me?

Because I know:
Everything new
Is better than everything old.

It is satire, of course, a play on the plagiarism of novelty and much like reading Dickens today and discovering that the human race has evolved not one pace forward since the days of Victorian squalor. Indeed Dickens wrote at length of the plight of slum dwellers in those unlit streets. The average height back then was around five-foot-five (165cm) Today it is more like five-foot-ten (178 cm). But this simple statistic ignores societal variations; those in deprived areas are more likely to tend to the Victorian average and as social mobility has been lost, whole inner-city boroughs are made up of people for whom six feet in height is a freak of nature.

Everything new is better than everything old. But an old plan in new clothing has resurfaced to take advantage of this disadvantage. The government's Technical Housing Standard requires floor-to-ceiling heights to be at least 2.3 metres, a requirement that has been in place for half a century or more. But developers have realised that with inner-city humans being shorter, housing being in desperate demand and building heights restricted by the planners, a 10% reduction in ceiling heights would allow a whole extra floor in a ten-storey block of flats. 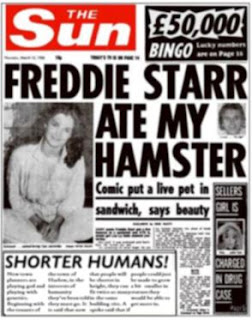 In the guise of something new, the London borough of Newham has been quietly resurrecting an old plan from the early nineteen seventies. Despite the recent tragedy at Ronan Point, planners came out in favour of a trial scheme: In the 'interests of humanity' the developers of Harlow New Town proposed a restriction in the height of inhabitants for precisely this reason so that in the words of Mr Gabriel, a spokesman at the time, the genesis of the idea was the possibility tat they could 'fit twice as many in the same building site'. They said it was all right. It seems that some things old are just as good as everything new.