The non-story of the week has to be the pension projection and its non-too subtle accompanying scare message. Most of those who won’t qualify for the full state pension in the relatively near future will be those who have made insufficient contributions for one reason or another, often because they were unaware of the need, sometimes through part-time working, or working only until they could afford not to, supported by a partner. The lifetime unemployed need not panic of course; their ‘stamp’ is full paid up... by you.

But the bit that kept being headlined was the prediction that three quarters of people currently in their twenties will lose out on around £19,000 over the course of their retirement. Firstly, given that they are expected to live to a hundred and therefore spend about 30 years in retirement that amounts to around £12 a week in today’s money. But, secondly, will there even be such a thing as a state pension by the time they retire?

The parlous state of the country’s finances – successive governments paying for bread and circuses with borrowed money - suggests the universal state pension may be on borrowed time. Anybody who has the means and foresight will not rely on future state provision, besides, isn’t it about to become compulsory to be enrolled in a company pension scheme? If the government is truly serious about retirement planning it should stop taking National Insurance contributions as current income and let workers divert that directly into their own future. We’d be able to fund fewer maternity units, sure, but babies are so last year.

But we're talking another 50 years here. Nobody knows what the world will look like post-June 23rd. Will people even retire in the way we think of it today? They could have cured death by then. We might even, finally, have sorted out those hover boards. To expect what is increasingly looking like a failed socialist big-state welfare model to survive until then is fanciful. To rely on it is bordering on lunacy; we’ve only had any form of state pension for around a century and it used to be a pittance that few lived long enough to claim.

A child of the nineteen-fifties could expect to go into a job their grandfather would recognise. A child of the twenty-teens could easily end up in employment that their nineteen-nineties parents may not even be able to comprehend. We have come through the astonishing revelation that you could even make a fortune by being Jade Goody – thanks for that, Max Clifford – to a world where children can become millionaires by simply having an idea. A penny for your thoughts has become reality for some.

When I was in my late twenties the internet was still a decade away, ‘white European’ wasn’t a derided racist minority and most people worked at a place, with colleagues, for a boss; the idea of working from home was for a very few lucky people with quite special skillsets. Now it is possible to telework, for machines, with virtually no direct human interaction at all – this suits a surprisingly high number of people, who would far rather work at a screen than have to deal with pesky people all day long. How this freelance work-hopping would provide a company pension is hard to see. 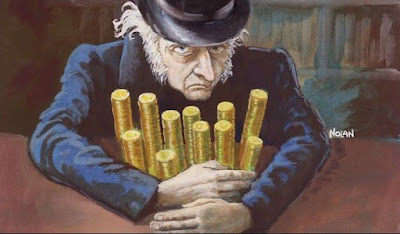 If you don't look after the pennies, the government will.

But what is perhaps easier to image is a world where you squirrel away your savings, out of the reach of governments and deny them the access to funding via plundered tax and national insurance. You decide how you spend now and what you save for your future. No wonder the government want to scare you about pensions in a future they have no control over – they must be absolutely shitting themselves.
Posted by Batsby at 05:19