Well, I got canned again. By Twitter, that is. The offending post was innocuous enough - I am not the first and will not be the last to suggest that our Parliament is thoroughly broken and, being unfixable, a better remedy would be to blow the whole lot up and start over. This was the post, which Twitter insisted I delete, and then went on to suspend my account: 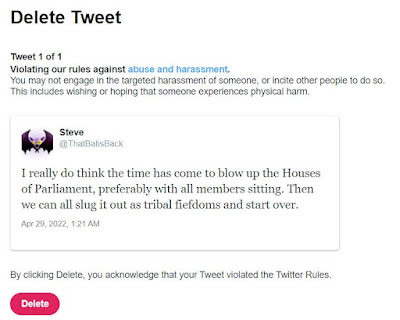 I very much doubt that anybody could be offended by that, especially the usual leftist complainants who spend most of their sentient lives, such as they are, screeching for the most horrific of punishments to be inflicted on the Tories. No matter the colour of the rosettes, British politics is moribund; a deadly sludge of mire and sleaze, of corruption, venality and self aggrandisement. It is not fit for purpose and sometimes, you have to move on.
Which kind of gets me back to Twitter. For a decade now, Twitter has been my family, my friends and, if I'm honest, my entire social life. Why should stating what would be absolutely normal among friends be a hanging offence? Some get away with far, far worse, harbouring as they do great hatred for all who do not share their thinking. I hate nobody - hate is such an immature response to anything - yet I get labeled a hate criminal for saying out loud what so many whisper among themselves.
Will Elon Musk change anything? I doubt it. Will I find a way back onto the platform? I'm not sure. Will Twitter even survive the decade, given that the young are uninterested, it seems, in anything which allows two-way conversation (to a point)?
Who knows. So, until (if) we meet again, stay safe, be happy and don't upset the algorithms.

Email ThisBlogThis!Share to TwitterShare to FacebookShare to Pinterest
Labels: Suspended