What Comes After Climate Change?

I am very happy to accept that when scientists generally all agree on a topic – climate change, pandemics, renewables, and all that – they are almost certain to be right. Just because many previous predictions did not pan out exactly as described, doesn’t mean that many more were not actually vindicated. But we live in an age where mere facts take second place to feelings, and faith is still a stronger motivator than the plain truth.

Everybody has a different level of investment in the current climate narrative; the elderly just want to hang on to the world they knew without having to make too many changes. The young have been terrified into believing that the human race will actually become extinct in a few decades. And the political classes are panicking about being blamed for it. Those of us in the middle, the boomers who will end up paying for it all are rolling our eyes and waiting for the next hyperbolic announcement to come along.

The truth is nobody really knows what to do. Nobody. Oh, there are plenty of talking heads willing to promote their vision for the world. And there are lots of yummy technological innovations lining up to be recognised and funded. But, just like last week’s local elections, even when all the evidence is in – the votes have been counted – the interpretation of the results varies from sombre acknowledgment to wild speculation. We know our politics is broken; we just don’t know how to fix it.

Same with the climate and the demonstrations and disruption caused by the Extinction Rebellion crowd and their hangers-on have not helped. What they demand is, literally, impossible. All human economic activity would have to cease immediately. The resulting hand-to-mouth existence would be so horrifically inefficient that, if anything, emissions would increase and the competition for scarce resources would result in wholesale chaos. Do as this peculiar mix of children and old hippies insist, and everything would turn to shit very quickly indeed.

Already there are forecasts that the metals and minerals needed to build the green revolutionary machine are becoming harder to extract. More and more energy will be expended in trying to winkle out dwindling supplies of copper and cobalt and the like, and more and more energy will be expended in waging the wars to possess the land in which those supplies are located. The pursuit of the green dream will, it seems, be the direct cause of increased CO2 emissions for decades to come. Irony, thou art come in human form.

Education might once have been a large part of the answer, but I see a dumbed-down population, in thrall to the whims of Tik-Tok and other social media, unable to concentrate for even ten minutes at a time. I see people who are incapable of critically assessing even small chunks of the mountain of information they receive every day. And I see people helpless to do anything other than parrot the lines they are given by their current cult leaders. 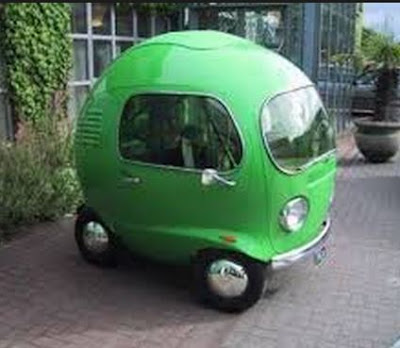 Next - the transport of the future!

Maybe they prefer it this way. Maybe they prefer living in a Netflix Special version of life in which everything is a drama, every episode ends on a cliff edge and every denouement is simply a springboard to the next surprising plot development. The way it looks to me right now is how Heroes and Lost looked during the Hollywood writers’ strike, and I am expecting to see many more rambling, incoherent episodes as The Climate Crisis lumbers drunkenly on to its final, disappointing cancellation.