The Owenisation of the Shirking Classes

We had a good thing going, once we’d worked it all out proper, like. See, since at least the Seventies there’s been a general decline in the heavy, dirty jobs that us plebs are good at – the unions didn’t really help, if we’re honest. At the same time we had the cold war and the rise of the weedy, speccy socialist intellectual. Teachers who had never fought in the real war and well-to-do, arty types on the telly started telling us we deserved better and all that, you know, like education and stuff? At first we fell for it and tried harder to get qualifications but, man, that was well-harsh, you know?

But at the same time we noticed that even though the country was broke, nobody let you starve. In fact, if you’d got kids you were sometimes better off on the Old King Cole than in a crappy job. Of course, there was the stigma of being a loafer and all that, not pulling your weight, but the Labour boffins had a plan for that as well. Soon, it was considered socially acceptable – even, you know, normal, to make a living just by having kids. Okay, you had to duck and dive a bit, you know, make sure you didn’t get cornered into a paternity test and everything, but on the whole it was okay.

I mean, we’re not stupid, innit? You do the sums: do you work hard at school, so you can work hard at life so you can buy a house and then worry about paying the mortgage and the school fees and higher rate taxes and all that, or do you just sprog up, get a council house for life, sit back and cruise. I see ‘em, the clever kids I was at school with – they’re just as fat and unhealthy as me, but man, the stress on their faces, you know?

Okay, so they started calling us Chavs. Fair enough, we know what we are; we’re a legitimate social class now – there’s people got PhDs on the back of studying the likes of us, like they was that David Attenborough or Dian Fossey or whatever. They’re happy, we’re happy – everybody’s happy and the bennies keep on coming...

Then along comes Owen fucking Jones.

At first we thought he was on his paper round, but then he keeps asking all these questions, right? Turns out he was writing a book, egged on by his mum I expect. Probably after a doctorate or summit, we thought, but no. He’s only gone and blown the whole shebang. “Chavs”, he called it, “The Demonisation of the Working Class”. Is he having a laff? We int worked since before he was bloody born and damned proud of it we are an’ all.

But no, like the Mother Teresa of Manchester he starts meddling where he’s not wanted. He’s not one of us – he thinks he is, but he’s not – and he starts getting all high and mighty about it all, blabbing to the New Statesman and The Guardian and The Independent and wotnot and he’s on that BBC Question time every fringing other week, shooting his mouth off about how we’re maligned and bloody ‘demonised’. That word is doing my head in – every fucker uses it now about fucking everything.

Oh he means well – he thinks he’s a bloody crusader but, honestly, all he’s done is alerted yer actual working class and got them all wound up and angry. But it’s too late now isn’t it, Owen? Because not content with writing books about us and turning us into hate figures your lot only went and stirred up the grafters who paid for it all as well; letting in anybody who wanted to work for fuck-all and keeping the wages down. Why did you do that?

So now, thanks to you and your bloody mum – that Tolly Poynbee bird – and all your Labour mates, nobody can manage without bennies, even if they are working. And they’ve just sussed out that bennies have been going up for the last five years, while working wages have been going down. I tell you it don’t take a sociologist to see it’s going to end in tears. We weren’t fucking ‘vulnerable’ until you started banging on about it. We were doing fine. 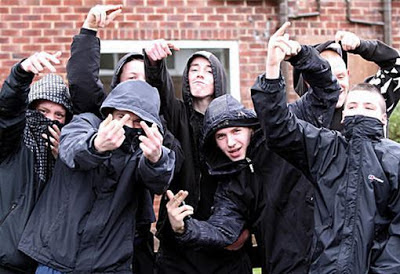 So cheers, bloody lefties; thanks a bunch. With the cost of living going up and up, bedroom tax coming in, workfare projects... the writing’s on the wall. If it gets any worse for us, we might have to up sticks and take our benefits to Bulgaria.
Posted by Batsby at 00:08