What on earth is going on? A golden rule in big business seems to be that if it’s all going wrong, reorganise. Or if it’s going okay but nobody’s noticing, reorganise. Or, what the hell, it’s two years since we last reorganised… reorganise. Maybe it’s all the jibes about parties being filled with career politicians who’ve never had a proper job? I know say Dave, Ed, Nick and Uncle Tom Cobbley and all, let’s make like a PLC and have a bit of a tidy up.

So, while the world was wondering what sort of a stance they should take towards the Ukraine and brushing up on their Crimean history, Ed Miliband, realising it had nothing whatsoever to do with him, took a break from standing in flood water looking baffled. In an effort to distance himself from the pratfalls that have marked his leadership and put the ‘special’ back into Labour he held a special conference on… now what was it? Everybody has already forgotten because of Andy Sawford’s brilliantly timed idiocy, writing to Waitrose to urge them to cease and desist handing out free coffee. (If you haven't already done so you really must watch @LeCreusetFiend's excellent Downfall spoof.)

The Internet was alight with Costa Living Crisis jibes within moments and whatever electorate-engaging bollocks, Ed thought he was dabbling in, Sawford’s petulant missive took centre stage instead. If free coffee harms local coffee shops, then free food must hit the takings of local grocers too; so by Labour logic must they also demand the closure of their beloved food banks? It would be like the coal mining industry all over again - Labour hitting their own the hardest. Just what is it with socialists that they need to dictate how everybody should think and speak and act? And every time they do so, they demonstrate how completely unsuitable they are to hold any such power. Joined-up thinking? I wouldn’t trust ‘em with joined up colouring-in.

Under Labour we’d see quotas, tokenism, compulsion and incompetently micro-managed social engineering; they just can’t help it. What happens every time they speculatively float a policy? Shares plummet, companies threaten to leave the country, insurers refuse cover on yet another sector and wealth producers quietly take stock and calculate how soon they will be able to sell up and leave for early retirements abroad. But here’s the worst bit: if things remain as they are there is a very good chance that this clown will become the next Prime Minister, because the bulk of Labour's vote is delivered loyally and without question by tribal morons who harbour a seething hatred of the alternative.

Blind to reality all Labour has to do to guard its vote share is to tell people that Labour is good, Labour is kind and you are good and kind if you vote for them. It works; keep telling them, over and over again and watch as righteous, ill-informed mobs picket banks and factories and hospitals and crusade against cruise missiles, save whales, ban bombs and if necessary pillory people and harm their families, put them out of work and sometimes beat them up, all in the name of the loving kindness that Labour will bestow. “Labour evil is so much nicer than Tory evil, isn’t it?”

Some people actually feel good about themselves when they vote for Labour. They are bringing ‘social justice’ by condemning their own kind to perpetually rely on the state. They are ‘saving our NHS’ despite the partial privatisation of services being rife under Labour and its crippling inefficiency wasting ever more money. With unquestioning zeal the faithful accept at face value every lie they are told about the coalition. Or the simple ‘kind’ lies; that everybody is beautiful in their own way; that everybody has a talent; that ADHD explains and excuses poor behaviour. Leftism relies on having a narrative, even if it’s a warped one. 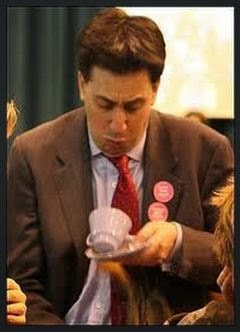 But look, it’s so much more serious than that. Branding the Tories as ideological, Ed presided this weekend over reforms that may well give the unrepentantly Marxist unions greater power still over the party. If you want to see where communism inevitably leads, ask any citizen of the former Eastern Bloc. And here’s the kicker: if Labour DOES get in next year and if Ukraine’s civil war sparks off World War Three, we’ll be relying on Ed ‘Wallace’ Miliband to step up and be our next Churchill! Oh, yuss!
Posted by Batsby at 05:05