“Zero-Zero” was the key message in Ed Miliband’s latest – some say the tenth – relaunch speech. Does nobody read his speeches before he delivers them? Oh yes, of course, EVERYBODY reads them before he delivers them because they are ‘leaked’ to the press beforehand as a matter of course. Why? Why would you hand your opponents the opportunity to pick through your thoughts and dismantle your cavalry charge before you’ve had the chance to saddle up? Into the valley of death rode the six hundred… and we all know how that ended.

But surely, a headline slogan of zero-zero at a time when Labour’s poll ratings have slumped and Miliband’s is the lowest, for any leader of any party... ever, can only look like a death-wish aspiration. The ineptitude of politicians to organise such apparently simple events as piss-ups in breweries reminded me of the story, a few years ago, when scientists at NASA developed a gun built specifically to launch dead chickens at the windshields of airliners, military jets and the space shuttle, all travelling at maximum velocity.

The idea was to simulate the frequent incidents of collisions with airborne fowl – bird strike - to test the strength of the windshields, fuselage, engine intakes and superstructure. As a result, airborne safety improved considerably and when British engineers heard about the gun they were naturally eager to give it a go. In particular they wanted to test out the windshields of a new design of high speed train and quickly got in touch with NASA, requesting they send them all the necessary kit.

Arrangements were duly made and the British team assembled trackside to test out the train during an unmanned trial run. In the distance, but rapidly approaching, the new train appeared as a tiny dot, getting larger by the second as it sped towards them at around 150 miles an hour. The chicken gun was aimed, loaded with one of the corpses helpfully supplied by their American friends and as the train came within a hundred metres the fowl was launched directly at the windscreen.

The engineers watched, horrified, as the chicken hurtled out of the barrel, crashed into the supposedly shatterproof shield, smashed it to smithereens, crashed through the control console, snapped the engineer's backrest in two and embedded itself in the back wall of the cabin. 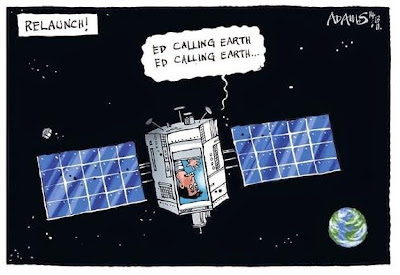 In a state of shock, the head of the British team dispatched a telegram to NASA to inform them of the full details of their experiment and its catastrophic results, along with a request for help. NASA's response was just three words, "Defrost the chicken."

[PS: Since I wrote this, Nigel Farage has responded to Ed's trash talk and challenged him to a live debate. Miliband has wisely turned him down; his troops dreamed up excuses for this, but in truth he wouldn't stand a chance. Advice to Labour regarding their leader? Defrost the chicken.]