Give a man a fish and he’ll eat for a day. Teach a man to fish and he’ll be gone the entire weekend. Joking aside, as tired as the old aphorism about giving people the tools to look after themselves is, it is nonetheless a verifiable and logical truism. Man cannot live by charity alone and it is not a kindness to insist that they do. For all the [questionably] higher motives of the resurrected Band Aid troupe the recipients of their largesse would be far better off in the long run if they were given the means rather than just the money. Feed the world? Let the buggers feed themselves.

This principle was, until recently, almost the definition of Britishness; keep yourselves to yourselves, look after your own, but come together when necessary to build the barn, reap the harvest… or repel the invader. But tradition and traditional structures mean nothing to the ‘progressive’ left; in their attempts to advance the bizarre ideology of enforced equality nothing has been sacred, nothing has been immune to destruction. Break down the family unit, debase the principle of self-determination, make everything subject to state regulation and make the state the sole arbiter of decency and fairness.

On what grounds can Labour and the left continue to try and claim the moral high ground when so much of what they have done is so clearly contrary to what most ordinary people would regard as sensible and morally just? Here are just a few ways in which the extraordinary hypocrisy of the left manifests itself:


The left flag-wave for an ideology that has only ever caused harm, given enough rope. Socialism always ends in queues and rationing but the socialist cure for socialism is always more socialism and their excuse is always that it wasn’t true socialism anyway. What works in theory in fanciful heads doesn’t work when mere humans try to follow it. So they have to make more things illegal, constrain trade, tax more, borrow more and as the hurt rises, invest more in the message. Tell people how well they are doing – despite the evidence of their own eyes - and how horrible it would be if the nasty parties of self-determination and aspiration got in. 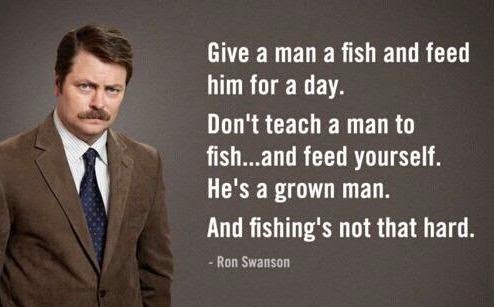 What we need is a government of men and women prepared to actually roll up their sleeves, take the flak and get on with what has to be done. Not a bunch of Oxford PPE graduates squabbling in the common room over points of political theory. Otherwise in the brave new world of EUcialism there will be no fishing by anybody unless they have undergone a course in Fish Empathy and Diversity, adhere to strict rules enforcing the equality of fishkind and most of all, harm no fish. In other words, just as with Band Aid, expend time and energy talking about the problem but ultimately achieve nothing. Teach a man to fish then prevent him from going fishing? Gutted.
Posted by Batsby at 05:36