Tarquin, Malcolm and Seamus were near to death. Their attempt on the Paris-Dakar record had ended in disaster and far from the intended route, their vehicle a mere burned-out wreck, they had set out on foot to find help. The signal fire had failed to bring rescue and no aircraft had been seen in three days in the clear blue skies above them. Out of food and near-delirious, they had decided that their only salvation lay in their own endeavours and ignoring all advice to stay with the dead and smouldering truck, set out on foot.

Twenty-fours later the water was gone and reduced to crawling, they dragged themselves across the hostile and unforgiving terrain, near to collapse and certain death. Suddenly, between his fingers, plunged deep in the sand, Tarquin felt something smooth and hard. He pulled out an ancient and sand-blasted oil lamp and held it out for the others to see. Malcolm grabbed hold of it and squinted against the harsh reflection of the sun on its burnished surface. He passed it to Seamus who rubbed it on his sleeve. In the sudden flash that occurred all three were blinded and clenched their eyelids shut.

Tarquin was the first to speak. Through parched lips in a stiff Home Counties accent he said "Oh, what I wouldn't give to be at Henley Regatta right now, my darling Bathsheba on my arm, swinging her parasol and the pair of us skipping along, sipping cool, cool Pimms from a tall tumbler. Marvellous!" And before the others had time to react the genie clapped his hands twice, said "It is done" and - poof - Tarquin was gone, presumably to inhabit the very scene he had just described.

Malcolm was startled at first then impressed. He turned to the genie and declared, "See, me, Genie, y'ken. Whit I'd like is tae be on the bonnie bonnie banks of Loch Lomond with a pretty wee lassie by mah side and a bottle of good Islay malt tae go with a hearty meal of neeps and tatties and haggis, to the rousing skirl of the pipes. Can ye fix it, mon?" The genie gave him a wry smile, deciphered the request and clapped his hands. With a puff of smoke worthy of Ali Bongo at his best Malcolm was whisked away to fulfill his wish. The genie turned to Seamus. 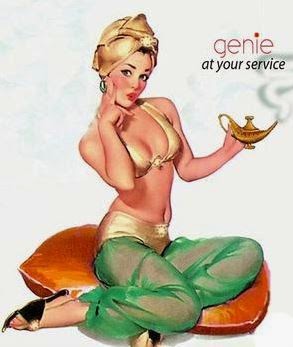 "What?" said he "Is it my turn now?" The genie nodded and waited... and waited. Seamus screwed up his face, furrowed his brow with the effort of thought. Long minutes passed and the genie, despite having the patience to live in a buried bottle for thousands of years began to grow restless. He tapped his feet, examined his finger nails and in the end demanded Seamus give him an answer. Seamus looked up at the floating figure, looked around him and declared, "Well, you know, it is awfully lonely here without the other two..."
Posted by Batsby at 19:03