Democracy has been served and Viktor Mihály Orbán stays in power in Hungary. But what’s this I hear, the wrong sort of democracy? The ‘D’ word is often used to denote freedom, a form of decision-making where even the lowliest has his say. But should the will of one person be exactly equivalent to that of another person? Should an employer of many people, provider of many livings only have the same clout as those who serve him? Should a nurse’s priorities carry the same weight as a soldier’s, a judge’s as those of a petty thief? Come to it, what do you mean by democracy?

The people who didn’t like the outcome of the referendum nevertheless generally support proportional representation, under which system we would still have narrowly voted for Brexit. Our first-past-the-post system is a form of democracy, but is widely open to fraud and gerrymandering; would that have returned the ‘correct’ referendum vote? Was a simple majority enough and if not, what margin would be acceptable? In Britain we are so neatly split down the middle that practically any referendum on any issue who’s outcome isn’t clear beforehand is going to have a narrow outcome.

Winston Churchill said in 1947 “Many forms of Government have been tried, and will be tried in this world of sin and woe. No one pretends that democracy is perfect or all-wise. Indeed it has been said that democracy is the worst form of Government except for all those other forms that have been tried from time to time...” And he was right. Elevate a despot to power and your precious freedom is gone. Make it a free-for-all and much the same outcome ensues. We value our freedoms and our protections and our democracy gives us them, but...

Democracy is divisive; it produces winners and losers. In Britain it means that most of the time, close to 50% of the population are pissed off, the only consolation being that from time to time we get to swap the misery. But this is the game we’re in and it almost always better to make a decision than to muddle along without one, even though large-scale opposition to those decisions is inevitable. One thing noticeable in the divide, however, is that when the broadly right are in opposition they moan a bit but then get back to work because, after all, they’re paying for everything and moaning doesn’t get the work done.

When the left are in opposition, however, bitching and moaning takes on a whole new meaning. Largely freed of the need to keep the economy afloat – public sector jobs are a cost, not a contribution and many on the left are unemployed, students, etc – they can launch demonstrations, go on strike, flood social media with commentary and generally make a nuisance of themselves. They may be in the technical minority, but boy do they have a loud voice! 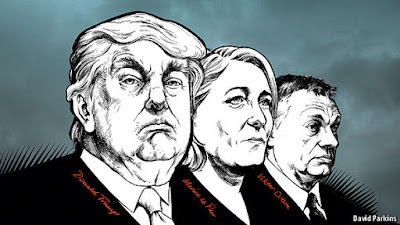 The rise of the right? Let history judge.

Right now the left, although preternaturally vocal, are fighting for their survival. The socialist EU super state is being challenged and the sucklers on its teats are not happy. They call democracy ‘populism’ in order to discredit  it and warn of ‘the rise of the far right’, by which they mean you and me. And Orbán’s re-election is – in their propaganda – one step away from Mussolini. But have a good look at the left. Listen to their words, see their actions. Whose feet are the jackboots really on?
Posted by Batsby at 08:06