Well, what a to-do. The PM tweets out a happy St George’s day – a tweet, mind, not a gushing video message like she generally does for islamic celebrations – the same day it is announced that henceforth we will have a national Stephen Lawrence Day. I thought it was Tony Blair who wanted to rub the right’s nose in diversity, but this Conservative government is doing just fine. Jeremy Corbyn, not to be outdone, announces that ‘when’ he is PM he will make St George’s Day a national holiday.


But wait, surely celebrating that most English of days is anathema to the left, who want more than anything for there to be no more England. Well, see, it is well known that Dragon-boy George was a foreigner, so this is perfect; let’s rub in the fact that even our patron saint was an immigrant and furthermore never even darkened our shores. Corbyn says “If we win the next election, St George’s Day will become a national holiday for Britain’s workers. It will be a day where we can all show our pride and celebrate our country’s tradition of fairness, inclusivity and social justice.”

Oh, there’s all sorts of wrong, right there. For a start isn’t international communism’s May Day bank holiday supposed to be the workers’ national holiday? Also, I very much doubt that the Jocks and Taffs will welcome St George into their hearts. And as for that last phrase - fairness, inclusivity and social justice – well, that’s just a substitution for ‘equality and diversity’ really, isn’t it, the imposition of which appears to be deliberately intended to lay waste to all vestiges of pride in a national identity.

Did he just not register the Brexit vote? Or maybe he didn’t listen to the repeated telling of why the vote went against all the efforts of the establishment; despite the confected tales of impending doom and disaster people still felt strongly enough to say no to more displaced and disconnected governance. Maybe kindly Uncle Jeremy still believes that the Islington set is somehow representative of the wishes of the horny-handed sons of toil his party tossed aside years ago, favouring identity politics ahead of genuine purpose.

But at least he hasn’t abandoned a central plank of Labour’s electoral folly adding to his speech, “Eight years of Tory austerity, which Labour will bring to an end, have had a disastrous effect on our vital public services and workers have paid a heavy price in the cost of living and their working lives. We will give our workers four extra days’ paid holiday.” Hoorah! Or, to consider this in more grown-up detail, WTF?

The last Labour government, ahead of the banking crisis, mortgaged the farm and set it on course for bankruptcy. The Conservatives were elected to undertake the unpopular task of reining back the deficit, so just as we seem to be, finally, turning an economic corner here, comes the wrecking crew with their promises of jam tomorrow. And how will we pay for this jam, given that we still have a national productivity crisis? Why, we’ll take a few more days off, sitting on our arses and contemplating the miracle of multiculturalism, thank you very much. 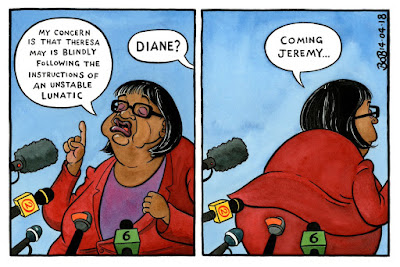 Jeremy and the Dragon...

A Twitter meme is currently doing the rounds and the words read: “Do you know what the Tories hate the most about Jeremy Corbyn...people love him, we'd lay our lives to defend him, he's a dignified, courteous, gentleman, a man of integrity, a man of courage, he's everything that Theresa May is not, a politician with real conviction. #JC4PM” Well, many in the Labour Party do have convictions, criminal ones, but if those aren’t the words of a brainwashed cultist, I’m hard pressed to find a better example.
Posted by Batsby at 06:52