So the Conservatives are dead. Not just here in the UK, where they have been on life support despite best advice for decades, but in Spain, too, it seems. The supposed ‘fascist’ ‘far-right’, ‘extreme right’ resurgent Nazi party, Vox, has split the right-wing vote, but the jubilant declarations of victory for the left have a hollow ring. The socialists didn’t manage an outright majority and some commentary suggests they only held the seats they did because people believed the negative campaigning against the ‘voice of the people’.

Make no mistake, Vox’s party name is not chosen in vain and its equivalent across the westernised, socialised world is growing in confidence. Socialism sounds so good when you only hear the aspirations, but humans have a habit for acting in their own interests. When a political party promises milk and honey the do-withouts are naturally drawn to them; why would they do otherwise? But when they realise that the left is just as authoritarian, if not far more so, than the right, many find the promise turning sour.

Yes, of course, if you are at the bottom of the heap, of course you should want better. And from that position there appear to be far too many who sail through life without lifting a finger; inherited wealth, cushy positions, more money than they can spend in a lifetime, etc. The sort of people who openly display their good fortunes (boastfulness also being a human trait). But they are just the visible targets, largely because the rest of us are quietly toiling away, getting by and hoping not to be rinsed by the system.

For the fact is, tax and welfare is a zero sum game. Just as you can’t borrow your way out of debt – no matter what Jeremy Corbyn might think - you can’t tax yourselves into prosperity. Yes it could be fairer, yes some people could and possibly should pay more tax, but the reality is that profligate governance got us where we are now and the election of an uber-profligate replacement will do nothing to improve the situation apart from some highly visible, highly popular, but ultimately doomed redistribution.

But it won’t be taxing the rich to feed the poor it will be – as always – taxing the coping to prop up the needy and – as always – it won’t be enough. The only outcome of same-old-socialism will be even more support for the right in the future; and it will come from the very people on whose side the left always claim to fight. Instead of the moderate right who are currently winning support, socialists will embolden and empower the sort of ignorant far-rightism they are currently crying wolf over. 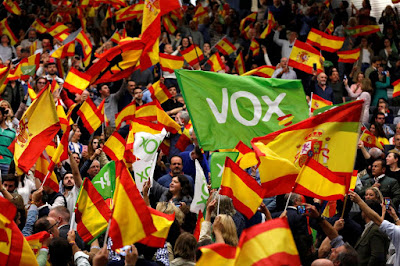 The voice of the people - coming to a country near you.

So, this Thursday and quite rightly, the Conservatives are going to take a hammering in the local elections, but will they learn from it? Of course not. Labour won’t suffer so badly, but will they understand why? Almost certainly not. Brace yourselves for your council taxes to increase again, your potholes to go unfilled, your street lighting to splutter and die and your town centres to decline still further... yet expect no realistic solutions to come from any quarter. Politics as usual.
Posted by Batsby at 07:24