Corbyn is not for Christmas

As the race hots up for the next sacrificial lamb to hop aboard the Conservative Party leadership altar, you would be forgiven if you considered that anybody running shows a monumental lack of judgment. Some of the participants are demonstrations of vainglorious ambition trumping competence, standing on records which are way short of exemplary; why, some of the candidates ought to be stuffed and exhibited as a warning to future generations. Whoever picks up the baton dropped by Tearful Theresa is unlikely to survive the next General Election.

But what of that next GE? Twitter lit up yesterday with gleeful prognostications under the hashtag #CorbynByChristmas. Seriously, there are still far too many deeply radicalised Corbynites out there, ready to bring a level of harm to life in the UK that would go far beyond anything Brexit might do. We could leave with no deal, have all pre-existing arrangements torn up, shut down trade and cooperation with Europe altogether and still manage to survive and recover far better than if we ever let in a Corbyn government.

The entire manifesto is a wish-list of proven malfeasance almost guaranteed to bring the country to its knees, but couched in the language of ‘caring’ and ‘kindness’ and equality. Pitched at people who feel aggrieved and disadvantaged in what used to be the most equitable and free society in the world, this is a devilishly tempting message, yet it involves curbing, at a whim, the freedoms of anybody who doesn’t toe the party line.

Make more money than we feel you should (regardless of how much tax you pay)? Then we will cut you down. Feel more comfortable among people more like yourself? Then we will force you to embrace traditions and cultures which you fear. Think that a traditional family unit best fits your vision of society? We will shame you in public and tell your employer that you are a bigot. Believe that Britain ought to hang onto its long tradition of Christian conservatism? Prepare to be ‘educated’ by the religious police. No cow will remain sacred, except those of Labour’s patron faith.

But it is economically – the most immediate and potentially most immediately devastating means of all – where the cult of Corbyn would do most harm. The Corbyn-McDonnell plan has a £Half-Trillion black hole at its heart and that is only at first glance. Labour would nationalise, regulate, restrict, control and condemn with a ruthlessness Mao himself would admire. Those who can would leave while they could; others would close down businesses and retire; criminality and the black market would thrive and corruption would pervade every public office, especially where the chosen people were invited to preside. 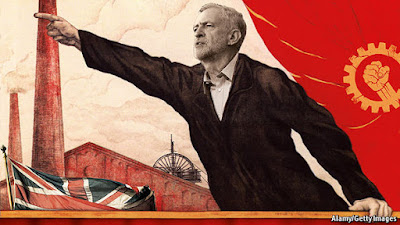 Comrade Corbyn is no joke

As our society crumbled and fell, we would be compelled to pledge allegiance to the party and sing the red flag on every public occasion. In the name of harmony difference would be legislated both for and against – some differences are more equal than others – and our history rewritten to demonise the very people who once made us the great nation we were. And as for that hashtag, sooner or later, Christmas itself would be abolished forever. Sleep peacefully tonight.
Posted by Batsby at 10:39