Who are the neo-Nazis?

Theresa May has at last resigned, but at least she has finally secured a lasting legacy - and one which will be celebrated for generations. By the Labour Party. The total breakdown of the Conservative and Unionists over the issue of Brexit has been spectacular, nail-biting and at times simply farcical stuff. But if Labour supporters are cheering this on they might also want to take time out to consider their own precarious legacy, for it is movements of the left, for whom Labour wants to fly all the flags, which have connived to altogether destroy the credibility of the press, Parliament and almost anybody in public life.

To say that leftists have double standards is to make hypocrisy sound as harmless as having a favourite flavour of milkshake. Of course, we all cry foul when our side is attacked and retaliation in kind is rarely the answer, but this past week has seen the ability to overcome cognitive dissonance being stretched to breaking point in some quarters. When Jeremy Corbyn was egged they were furious, yet when similar happened to Nigel Farage (or as the bien pensants now have it, just ‘Farage’) they cheered to the rafters.

Having spent the three years AC (After Cox) frenetically ranting about the rise of the right and politically motivated violence they barely flinch when charged with encouraging the same thing. In fact they openly mocked those who were conflating dairy-based assault with something worse, even as people like Tommy Robinson(NHRN) were facing down screaming, baying, brick-throwing mobs issuing death threats. What did police do? Not much; they have a right to counter protest, one silver commander opined.

While the left have reacted like hysterical children to every imaged slight, every slogan, every banner, every campaign talking point from those they label ‘the far right’, said far right has largely got on with the job and tried to peacefully make their point. And what has been the result? When a pensioner in Aldershot was milkshaked for supporting the Brexit Party they doubled down. Not only was this his just desserts[sic] it was obviously a fake.

Oh yes, Alastair Campbell, Emma Kennedy, Mike Stuchberry and others implied, suggested or downright insisted that this was staged by the ‘far right’ to stir up division and hate. It is only a couple of steps down Conspiracy Street and they will be imagining that we invented Nazism just so that a century later we could accuse the Labour Party of anti-Semitism. Talk about judging somebody by your own poor standards – if the right are as stupid as they insist we should barely be capable of spelling conspiracy, let alone plotting one.

But further, they insist that eligible voters have been turned away from polling stations. And no doubt, once the results are called, they will denounce every electoral official in the land for collusion with Russia. When you consider that they have been demanding a second referendum all along you would think they would have welcomed this, albeit accidental, opportunity to have their voice heard again. But the voice is week and wheezy, so they resort to what they do best – imagining that they really won, but were cheated. 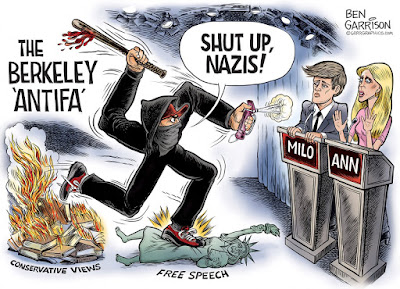 When purple-faced, throbbing veined, distorted-featured, shrieking malcontents throw bottles and bricks and repeatedly close down debate, sabotage peaceful events, threaten physical violence and even death, yet imagine that it is not they who are the Nazis you know that all reason has been lost. One day, it is to be hoped, they may look at their badges, their masks, their paraphernalia, their slogans; they may take stock of the atrocities they have committed and the lies they have told; they might just wake up and see the illusions they constructed and ask themselves – were we the baddies?
Posted by Batsby at 06:24