The misinformation, disinformation, spin and just plain lies continue to shower down from Mount Corona. It is practically the ONLY thing anybody is discussing and if you are going to use the metaphor of a war, it has more in common with a frenzied bare-knuckle scrap than any organised campaign. What weapons anybody turned up with are neutralised as soon as they are drawn or rendered useless on impact. But it’s not as if any sensible battle lines are drawn and it isn’t even clear how many combatants are engaged. It is a shit show.

The denizens of the Press Pack appear to be in contention with each other for the awards for most misused statistics, clumsiest attack lines and the near universal inability to stitch together an article which retains even its own inner logic. Confused, combative and rabidly driven to find the scoop, all they are really doing is turning the public against them. Expect some venerable titles to cough up their last and disappear from print forever.

If anything, the broadcast media are even worse, needing as they do to fill 24-hour spit roasts of anybody they can drag into their studios. This is a platform which has become more and more discredited as viewers tire of the gotcha interview, the relentless interruptions and the uneven treatment of guests on different sides of the argument. And it is even more desperate than normal as, in these locked down times, the ever pointless vox pop programme punctuators are near impossible without inviting the long arm of the law to reach out and feel your collar for unnecessary human interaction.

And now with the Neil Ferguson affair[sic] the airwaves are a-buzz with yet new conspiracies that he persuaded the government to lock down knowing that it would worsen the situation… at the whim of his lefty mistress. Oh yes, people – and including serious people - are actually touting the notion of deliberate harm being advised to cynically bring the Johnson government into disrepute.

Notwithstanding the fact that BoJo is perfectly capable of doing that all by himself, you all need to take a long hard look at yourself because a Cambridge study has apparently revealed that instead of being reassured that all these agencies, that all these actors are united in combating the pandemic, the British public is said to be the most fearful in the world about the possible outcomes. It is little wonder when the press gleefully reports our rising death toll as the worst in the world! Alarum! Alarum! Throw out your dead and lock your doors!

But as a few remaining sane figures have pointed out, every country collects and reports its data differently. It will be many months, if not years, before anything approaching a direct comparison can be made. You know all the variables: deaths with or deaths of, deaths in the community included or not, what about care homes, what about relative timings, lockdown or not, population density, disproportionate effect on different parts of the demographic? And then there is the variable experience of testing, including it not being entirely clear what current testing has actually achieved other than present another target for the press.

Some people have stuck to their obsessive support for everything the government has done, while others have clung rigidly to the idea that whatever the government has done has been wrong. This suggests that regardless of how knowledge of the pandemic grows these people only see the situation through the lens of their pre-existing political affiliations. But there are also the ‘floating voters’ who have changed their tune at each announcement, rather like Indecisive Dave from the Fast Show. 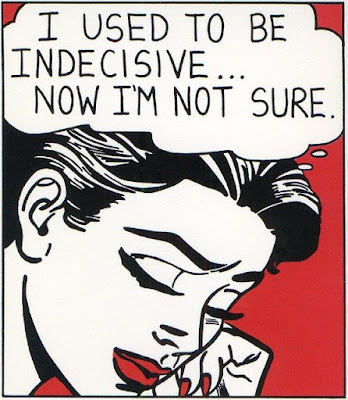 I say again, I have literally no means of judging other than my own experience. Right now I am unconcerned for my safety and I genuinely don’t know if that insouciance would have changed had we not locked down. And because we are not in a lab where we can reset and run the experiment again under different conditions, nobody else does, either. I have no answers; if you’re honest with yourself neither do you.
Posted by Batsby at 08:53