I am not going to write about Dominic Cummings except to say that the press must be truly desperate to unseat the government to dig up a two month old story and plug it relentlessly when most reasonable people are shrugging and saying, so what? As we begin to relax lockdown rules, who cares that somebody the left fears and hates did a reasonable thing without any apparent risk to others? Meanwhile, we have been inundated on a daily basis with videos of police, press and certain communities blatantly disregarding the rules and no action being apparent.

The press is supposed to inform us but more often than not it acts like a self-serving behemoth, gobbling up snippets of information and regurgitating it as fancy. The world as portrayed by the newspapers is simply not real, it is a fiction designed to sell newspapers. How’s that going for you, The Independent? If you have ever been involved in something that has been written about in the papers you will know the extent to which they write the story first and disregard the facts.

The language is invariably hyperbolic, more resembling the Four Yorkshiremen Sketch than Woodward and Bernstein. So much so that the Man Booker Prize would be more appropriate than the Pulitzer for these fanciful distortions. A mild annoyance is described as ‘fury’ or ‘rage’ in an effort to whip up interest about a story which may not even be true. The adjectival use of ‘incandescent’ is trotted out daily and everybody involved in a press sting is red-faced. There is rarely any attempt to use the fabulously rich English language when all you have to do to is stick to the assumption that your readers are too stupid to demand better.

A source close to government could just be somebody who lives in the constituency of a cabinet minister. A Senior government source is an unnamed and thus unaccountable sacked minister or, these days, a Remain voting backbencher. In anti-government stories (all stories right now) ‘Parliamentary’ sources are, obviously, opposition MPs and even when the source is named the partisan nature of their contribution is so blatant as to be an argument for the other side.

The papers, however, are dwindling in their influence, handing over the baton to the broadcast journalists. But such is the clamour for fame and the gotcha interview that the whole charade gets even more ridiculous on air. Relentless phone-in shows hosted by antagonists with clear agendas for discord. Fatuous magazine shows like Good Morning Britain whose main aim seems to be fame for their presenters. And of course we have the social media based news outlets where the political stench is overwhelming. 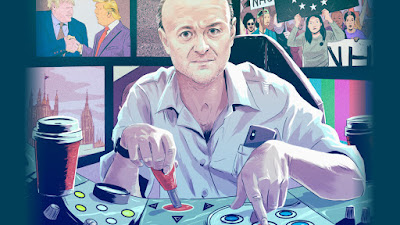 He's played you all

The news is rarely about the news, but about what interpretation of events the outlet wants to sell. The affiliations of the main organs is widely known so if you are a taxpayer who has never been on a protest it’s probably a good idea not to read The Guardian and if you are a rabid, red-flag flying Trott the Spectator isn’t going to be your cup of tea. Which means that the only reason you read your favoured papers is for its authors. The story here isn’t about Dominic Cummings, it’s about the storytellers.
Posted by Batsby at 09:02

Email ThisBlogThis!Share to TwitterShare to FacebookShare to Pinterest
Labels: Dominic Cummins, Press are part of the problem