Matt Hancock has resigned because he got caught, not for any other reason. Like human beings everywhere he had both strengths and weaknesses, and a weakness revealed ended his tenure as Health Secretary. Most of us would not lose our job over an affair, but in his case the hypocrisy of telling the nation to maintain distance while he indulged in the most intimate of contact was just, frankly, taking the piss.

But Boris Johnson was typically weak; he should have sacked Hancock as soon as he knew. Saying it’s all right, mate, we’ve got this, was not good enough. Abruptly declaring the matter closed was so naïve as to suggest that he, also, is now occupying a position he doesn’t deserve. Being quick is not the same as being decisive. And the price we all pay is the appointment of the insipid Sajid Javid to Hancock’s former role.

But it’s all over now, surely, the pandemic; if not actually, then for all practical purposes. Javid will get to preside ineffectually over a crumbling abandonment of lockdown restrictions, rather than an organised return to normality. On the back of Hancock’s handiwork, millions will just ignore the rules, regardless of any risk.

The government has rather suddenly become that supply teacher who can’t control the class. And rather than the touted ‘building back better’ the Johnson team will more likely have its hands full just trying to go back to what we had before. So much for the great reset; it was more like a two-year pause, just when it looked like we were finally crawling out of the ten-year sub-prime recession.

But a pause is what we need right now. The dash for net-zero will cripple many already poor families as energy prices soar and personal transport becomes too expensive for the masses. Instead of seeking to show off at COP 26 this autumn, with whizzy initiatives to lead the world, a sober government would be reflecting on the difficulty in controlling the behaviour of the masses when they can’t even control the behaviour of one randy individual.

Project Boris was already something of a circus – send in the clowns, indeed – but it says much about the country when the best that was available was a posturing fool with a penchant for Latin and a history of debauchery. And the alternative is Labour, a party which is desperate for power but has managed to alienate every part of its voter base. 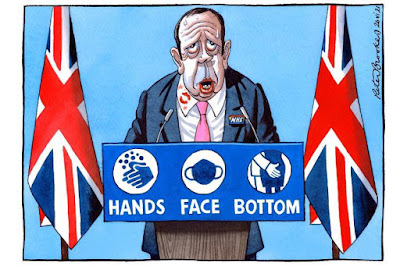 Britain deserves better than this, or do we? Looking at the moral makeup of the nation, the unruly and the feckless, the greedy, the grasping, the idle and the entitled, is it any wonder that we ended up with a governing class which looks every bit as useless as we do?