Who says searing political analysis is dead? While everybody else is distracted by the BBC and the so-called Newsnight scandal, the newsroom here at "When I'm King" has bagged the one that seems to have quietly slipped away in all the fuss. Today we have an exclusive interview with Twitter sensation and serial expenses offender, Denis MacShame ( follow @DenisMcShame ) of Flimflam Towers, Rotherham


So, Denis, are you sitting comfortably?
Yes thank you, Your Magnificence*. Glad to be here.

You were born in Glasgow as Denis Matyjaszek, to an Irish mother and Polish father. Would you say this actually makes you a European, rather than British?
Aby upewnić się, aby mieć pewność, I consider myself European. But we are all Europeans, small parts of the greater whole that is the glorious European Union. Britain is just a state within the United States of Europe in my opinion. Slowly but surely the EU have taken more and more control over our daily lives for the better - and long may it continue.

You changed your name when you worked at the BBC as reporter and newsreader from 1969 to 1977. But then you were sacked for using another fake name to call a radio phone-in. Would you say you make something of a habit of deceiving people?

I prefer to think of it as magic; hand quicker than the eye stuff. What you have to understand is that this isn't just a habit, it's a way of life. I no longer realise I'm screwing people over, not that I care of course.

Tell us when you first learned how trusting the public were of MPs with public money?
Instantly. The system was so flawed that trust was never an issue. Only after the big scandal caused by the evil, Nasty-baby-eating-Tories did things get harder. I became creative but sadly the BNP managed to... well, you know the rest.

Are you Labour by conviction, or did you just go with the party most likely to believe your lies?
I believe that the state knows best for the little people. So big government, pro EU, pro union and loose morals, Labour were a great fit.

Would you say the people of Rotherham were wrong to trust you to represent them? Or did they get what they deserve?
When I first got the Labour nomination I visited the area and one thing was clear, the people were dumber than spit. Honestly it was shocking, like I had found the missing link on one occasion  People this stupid get what they deserve.

What would you say to Mrs Esther Gorenny-Dosh of Eckerslike, who is is struggling to provide iPads and smart phones for her four children, while subsisting only on benefits?
Vote Labour, they will increase benefits for them. In the meantime I might have a couple spare they could buy on a good second hand deal.

Have you any advice for the millions of others out there who don't have access to easy unearned incomes?
Become an MP or civil servant. Part time hours, if you know how to swing it, higher than average pay. Great pension and no one can touch you even if you are rubbish at what you do.

How, exactly, do you make a claim for money not spent by an organisation that doesn't really exist?
With great skill and dedication. I wouldn't expect you to understand, you're just a writer after all.

Do you think you should serve a custodial sentence, Mr MacShame?
Of course not, I have been set up by the BNP, Nick Griffin should go to prison. 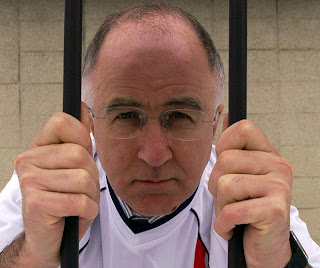 Mr MacShame, do you believe in unicorns?
Of course, I once claimed expenses for one.

And finally, are you still receiving repeat fees for Lovejoy?
Piss off!


(*Your Magnificence* <~~ This is how I am to be addressed until my coronation.)

(Bloggy thanks to Rob off of that Twitter for standing in for Denis, who was unavailable for comment. It was his idea not mine. I was merely a naive dupe, sucked into his fantasy world and I have been advised by my lawyers to keep schtum.)
Posted by Batsby at 06:12