Nobody who has read 1984 can fail to be awed by Orwell’s prescience and to many readers of a centre right political persuasion his chillingly wrought world of grey, stalking horror is already with us in the form of Newspeak, Doublethink and Big Brother himself. Orwellian has become an accepted adjective and scarcely a day goes by without some columnist describing our society thus. Possibly the most sinister modern manifestation of Ingsoc is the willingness of the young to readily denounce others to the state on some trumped-up charge of bigotry, free speech being secondary these days to the eradication of any form of upset. (Unless, of course, you belong to certain promoted species of the congenitally thin-skinned.)

But while all eyes have been on the evolution of Airstrip One, another seer of equal perspicacity has passed quietly into history, although his observations are as true, if not truer than Orwell’s. While modern day managers will be well acquainted with The Dilbert Principle, those of an earlier vintage will remember with a happy sigh, the insights of one Cyril NorthcoteParkinson. I have regularly cited Parkinson’s Law since I first became aware of its existence. Imagine then, my delight that Radio Four last night devoted a delicious half hour to revisiting this seminal work. (Go on, iPlayer it; you won’t regret it.)

First published in 1955, Parkinson’s Law states, “Work expands so as to fill the time available for its completion.” How very true – we all recognise the laxity of production once a deadline is removed – I’m doing it now, being distracted by the cornucopia of the Internet while I’m supposed to be writing to my self-imposed daily deadline. But Cyril also saw so much more besides and in a world where your worth is measured by your busy-ness and bustle and bluster, rather than your actual productivity his arch words are more applicable than ever.

“The man who is denied the opportunity of taking decisions of importance begins to regard as important the decisions he is allowed to take.”

“The smaller the function, the greater the management.” And “Time spent on any item of the agenda will be in inverse proportion to the sum involved.“

He recognised the futility of allowing governments to govern, yet the equally frustrating futility of allowing the people to exercise democracy. He saw that people mistake activity for action and job titles for importance and that such mistakes are an inevitable part of the human condition. More academic tomes seek to give us ever deeper (and ever more costly) insights into our psyche yet despite the millions of man hours devoted to revealing humanity none have come even close to such succinct searing indictments as the bureaucratic imperative, “An official wants to multiply subordinates,  not rivals”

In a week in which The TaxPayers’ Alliance has published its latest Bumper Book of Government Waste identifying £120bn of worthless spending it might do us all good to revisit Cyril’s simple dissection of the truth of bureaucracy and the plethora of waste it inevitably produces. If every government department would man-up and recognise these truths we would have many fewer and leaner government departments. The deficit could be cut in no time. 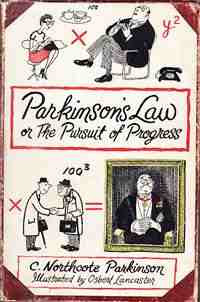 If I was running the show I’d have Cyril Parkinson at one hand and William of Ockham at the other, but sadly (or possibly thankfully) the world is not yet ready for our efficient ministrations. Much as I’d prefer not to piss on your chips, one thing is certain, although it’s a quote by neither man, “Whoever you vote for, the bloody government will always get in.”